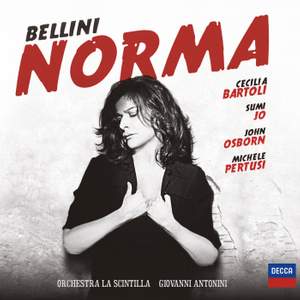 The result [of a mezzo Norma] is creditable and often expressive, but artistically compromised...while from a purely vocal point of view it sometimes sounds a struggle. Sumi Jo has greater success... — BBC Music Magazine, August 2013, 3 out of 5 stars More…

For generations Bellini’s “Norma” has been looked at from the vantage point of the Verismo era at the beginning of the 20th century. Now Cecilia Bartoli unveils the opera’s original pre-romantic style and colour by taking Norma back to its roots.

For the first time ever the entire music is recorded with period instruments from Bellini’s time. Traditional cuts are reinstated. Keys and tonalities are put back into place and the music is executed according to Bellini’s own tempo indications.

The leading characters were selected according to Bellini’s own choice of vocal colours: Bellini wrote Norma for Giuditta Pasta, who sang many parts which today are considered mezzosoprano roles. Adalgisa was sung by Giulia Grisi, a light soprano, and Pollione by Domenico Donzelli, who had a flexible, Rossini-style tenor voice.

A new critical music edition was compiled from the autograph score and many manuscript sources.

The result [of a mezzo Norma] is creditable and often expressive, but artistically compromised...while from a purely vocal point of view it sometimes sounds a struggle. Sumi Jo has greater success with Adalgisa, her light, fluttery soprano nicely matching the innocence of Norma's rival...chorus and period-instrument orchestra are excellent.

Despite using period instruments, the orchestra never sounds undernourished...Bartoli is, most assuredly, Bartoli, and if you are allergic to her in general, you will remain so...Yet you will hear things in her performance that will illuminate aspects of the character as never before...it is a pleasure to hear [the opera] stripped and clear.

Think you know Norma? Think again...It is, in fact, the orchestra who are the biggest surprise - and in many ways the biggest asset - of the recording. ...Bartoli herself is never less than commanding in the title role...However, I was never entirely convinced that she was seeing the role from the inside...Sumi Jo, however, is a delightful Adalgisa.

[Bartoli] sings Norma entirely on her own terms, without pushing her instrument to emulate any of her illustrious predecessors, and whilst listening I simply couldn’t imagine the role sung in any other way...If you don’t already have this opera on disc, this is entirely compelling in its own right; if you already own one of the older sets, it makes for a fascinating contrast.

Its principal revelations lie in the orchestral sound, stark and abrasive rather than comfortingly smooth, Giovanni Antonini's urgent conducting, and, above all, in Jo's immensely touching depiction of ruined innocence.

The timbres of Orchestra La Scintilla are enchanting, the chorus robust, the whole admirably paced by conductor Giovanni Antonini.

I feel confident endorsing this recording of the opera, which features vibrant conducting, atmospheric playing from a period orchestra and a searching, daring performance from Cecilia Bartoli, the most adventurous major diva of our day (as well as that great rarity, a mezzo-soprano Norma).

Bartoli is vocally and interpretatively thrilling and her darker tones contrast with Sumi Jo’s lighter-voiced Adalgisa, (echoing Pasta and Grisi, the roles’ creators). John Osborn and Michele Pertusi are also much lighter-toned than usual as Pollione and Oroveso. This is a must-have release.”

it redefines the work both in terms of sound and in appropriate casting...At the end of [her first] scene I was already convinced that Bartoli could convince as Norma on her own terms both on CD and, given the right collaborators, in the theatre...[Jo] is probably the most convincing Adalgisa of my recent experience....essential listening for any lover of bel canto.