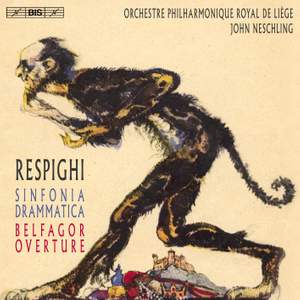 Neschling admirably sustains the fever pitch throughout – nothing becomes overblown or unduly hysterical – and the playing is first-rate in its dark intensity and force. The filler is the Belfagor... — Gramophone Magazine, August 2016 More…

Ottorino Respighi is primarily associated with his Roman trilogy, composed between 1916 and 1928 and celebrating the eternal city and its fountains, pines and festivals. Respighi was however a highly prolific composer in most genres and all of his orchestral works, composed both before and after the trilogy, display the qualities that have made the Pines and Fountains of Rome core repertoire in concert halls around the world. After recording the Roman trilogy with the São Paulo Symphony Orchestra, John Neschling has continued to explore Respighi's lavish orchestral scores with the Belgian Orchestre Philharmonique Royal de Liège, on discs released to international acclaim. On the team's third disc the turn has come for Respighi's Sinfonia drammatica a score of epic proportions (over 58 minutes in the present performance) for a correspondingly large-scale orchestra. Both these factors may explain in part why it is rarely performed and recorded, but the work also has a dark-hued, intense and, indeed, dramatic character which will surprise those only familiar with Respighi's more extrovert scores. Closing the disc is the better-known Belfagor Overture, a work from 1924 in which Respighi rescued material from an opera with the same title which had been less than warmly received at its première in 1923. Described as a 'lyric comedy', the opera tells the story of how a devil Belfagor himself comes to earth to learn more about love between humans, and the orchestral overture highlights the two main characters, Belfagor and Candida, 'the girl, pure, loving and faithful'.

Neschling admirably sustains the fever pitch throughout – nothing becomes overblown or unduly hysterical – and the playing is first-rate in its dark intensity and force. The filler is the Belfagor overture…an attractively scored piece of diablerie, superbly played.

A fine performance and vivid recording of Respighi’s Sinfonia drammatica.