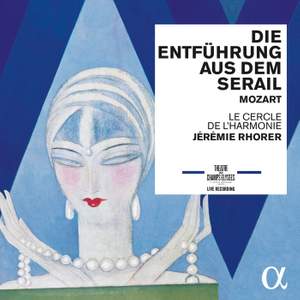 The conductor Jérémie Rhorer is today regarded as one of the finest interpreters of the music of Mozart in general and his operas in particular. After conducting Die Entführung aus dem Serail at the Festival d’Aix-en-Provence in 2015, he performed it again at a memorable concert at the Théâtre des Champs-Élysées in Paris in September of that year with his orchestra, Le Cercle de l’Harmonie. It is this exceptional event, captured in a live recording conveying all the dramatic intensity of the opera, that we present today.

‘In Die Entführung, Mozart presents a completely unprecedented vision of the singspiel, with highly developed ensembles and musical continuity at a time when contemporary spectators were expecting the standard alternation between spoken and sung sections’, says Jérémie Rhorer in the interview that accompanies the discs. That musical dramaturgy lies at the centre of this interpretation, which is served by an outstandingly homogeneous cast. This recording launches a series of recordings of concerts at the Théâtre des Champs-Élysées and a collaboration between Alpha Classics and Le Cercle de l’Harmonie, who will continue to place their excellence at the service of the great masterpieces of Mozart – and of other composers: watch this space!

The downside is a demonstrative audience, but Rohrer's way with the music is so invigorating — like Jacobs, he uses period instruments, which highlight Mozart's "Turkish" orchestration — that there are compensations aplenty...His cast mostly equals or even surpasses the rival sets.

It’s definitely a live performance – the audience makes its enthusiasm felt and the sound isn’t entirely polished, which I quite like. The cast is pretty appealing...[Rhorer offers] a whole lot of orchestral charisma: an overture full of bounce and clatter, pacey tempos that fizz but also breathe, textures that are bright and fibrous, a delivery that is happily slapdash without getting messy.