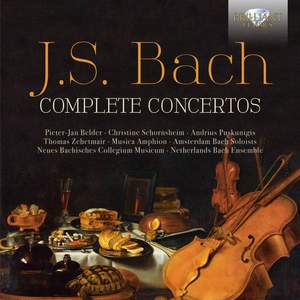 Violin Concerto in D Minor, BWV 1052 (reconstructed from harpsichord concerto by Anonymous): I.

Keyboard Concerto in A Major, BWV 1055: I. Allegro moderato

Concerto for Flute, Violin and Harpsichord in A Minor, BWV 1044: I. Allegro

Concerto for Flute, Violin and Harpsichord in A Minor, BWV 1044: III. Alla breve

This 9-CD set contains the complete solo concertos by Johann Sebastian Bach: the Brandenburg Concertos, violin concertos, keyboard concertos for one, two, three and four harpsichords and the Triple Concerto.

Although J.S. Bach used the word ‘concerto’ to refer to many of his church cantatas (the ones that he did not call, simply, ‘Stück’, or ‘piece’), the word’s Italian etymology usually denotes an ensemble work in which a particular element comes to the fore. Bach familiarised himself with the early Italian instrumental concerto tradition, produced by composers such as Albinoni and Torelli, with his characteristic thoroughness even before producing the Brandenburg concertos which he wrote while Kapellmeister in Weimar, in vain hope of preferment to a more glamorous posting to the court of the eponymous Margrave in Berlin.

The concertos of Antonio Vivaldi swept across Europe from 1711 onwards with the publication of his Op.3 set, ‘L’Estro Armonico’. Vivaldi set the standard for the shape, the style and the virtuosity of what we understand today as the concerto form, perfected in Bach’s own output in the D minor harpsichord concerto, BWV 1052. Bach himself transcribed several of Vivaldi’s concertos, both for solo keyboard and for chamber groupings – most famously the B minor concerto, originally with four solo violin parts, which Bach thrillingly amplified for four harpsichords. All this music is contained within this indispensable 9-CD set.

The performances here are all historically informed in style, if not all played on instruments either from or closely modelled on those used in Bach’s time. ‘Modern’‐instrument performances include the concertos which survive in versions for solo violin – though Bach probably wrote them originally with the harpsichord in mind – in which Thomas Zehetmair is both soloist and director of the Amsterdam Bach Soloists with his characteristically bold and incisive sound and interpretative insight. The oboe concerto recordings are Lithuanian in origin, with Andrius Puskunigis again soloist/director with the St Christopher Chamber Orchestra, in sprightly and mellifluous readings.