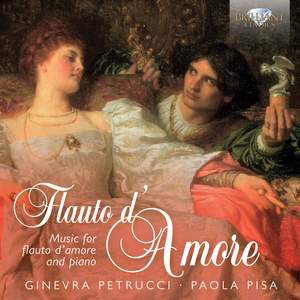 Gershwin: George White's Scandals of 1924 (arr. for flute and piano)

George White's Scandals of 1924: Somebody loves me (arr. for flute and piano)

Why has the warm, full‐bodied tone of the Baroque flauto d’amore been so neglected until now? Ginevra Petrucci proves on this release that the unusual instrument has lots to offer, as she takes the theme of love as her starting point for a remarkable and romantic album.

With famous works such as Elgar’s Salut d’amour, Tosti’s Amour! Amour!, Schubert’s Romanze from Rosamunde and Tchaikovsky’s None but the Lonely Heart, Petrucci has assembled an album comprising some of classical music’s most

beloved romantic music. Transposed to the flauto d’amore, they sound especially tender and warm. Pitched lower than a normal flute, this instrument is known for its sweet, mellow tone. It fell out of fashion in the 18th century but was revived by certain composers, such as Verdi and Mercadante, and some of the most famous flautists of the 20th century – such as John Amadio – were strong advocates of the instrument.

Petrucci’s father and mentor Gian‐Luca commissioned a new flauto d’amore from the renowned flute maker Albert Cooper in 1990. This solid silver instrument, the first of the modern age, is the one to feature on this album. Accompanied by acclaimed pianist Paola Pisa, this release is sure to soothe, combining highly expressive love music with a rare and superb sound.