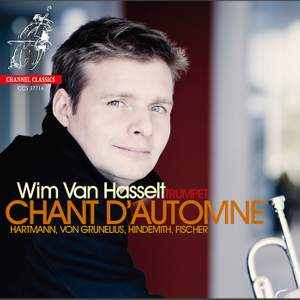 Van Hasselt is an exceptionally fine player with all the equipment in his armoury to delight, surprise and challenge the listener at every turn…the Hartmann Concertino is a hidden gem. Its recent... — Gramophone Magazine, October 2016 More…

Hindemith: Sonata for Trumpet and Piano

The title of this CD, featuring two world premieres (Grunelius and Fischer), is taken from the composition by the German pianist and composer Wilhelm von Grunelius. The inspiration for his work for flugelhorn, timpani and strings came from the poem ‘Chant d’automne’ by the French poet and art critic Charles Pierre Baudelaire (1821- 1867). The use of texts is a recurring theme in this colourful CD programme of music for the trumpet in a variety of combinations. At the end of the final movement of his Sonata for trumpet and piano, ‘Trauermusik’, Paul Hindemith incorporates Bach’s chorale ‘Alle Menschen müssen sterben’ (BWV 634). In his Eine Deutsch-Jiddische Kantate, Iván Fischer employs texts by Avrom Sutzkever, Rainer Maria Rilke, Johann Wolfgang von Goethe and others. The recording is also of particular value in view of the fact that the two world premieres of music by Grunelius and Fischer are performed by the Budapest Festival Orchestra under Iván Fischer himself, while he also conducts his own Eine Deutsch-Jiddische Kantate, with his daughter Nora Fischer as soprano soloist.

Van Hasselt is an exceptionally fine player with all the equipment in his armoury to delight, surprise and challenge the listener at every turn…the Hartmann Concertino is a hidden gem. Its recent re-emergence is to be welcomed…[this project] is testament to the brave, rich and resonant style of exceptional continental trimpet playing which, on this evidence, can be both epic and poetic