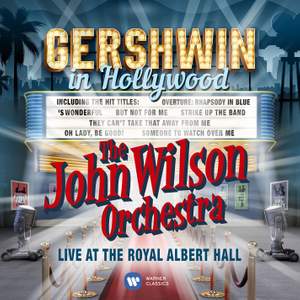 Live at the Royal Albert Hall

I don’t believe there is any such thing as a bad Gershwin song, but the very best of them feature in this luxury assortment…and this being a John Wilson album with his eponymous orchestra, they... — Gramophone Magazine, June 2016 More…

Gershwin: Gershwin / Arr Salinger: Girl Crazy: But Not for Me [Live]

Gershwin: Gershwin / Arr Salinger: The Barkleys of Broadway: They Can't Take That Away from Me [Live]

Funny Face: How Long Has This Been Going On [Live]

Gershwin: Gershwin / Arr Spencer: The Shocking Miss Pilgrim: Aren't You Kind of Glad We Did? [Live]

Gershwin: Gershwin / Arr Spencer: The Shocking Miss Pilgrim: For You, for Me, for Evermore [Live]

Gershwin: Gershwin / Arr Hayton: Star!: Someone to Watch Over Me [Live] 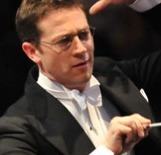 Recording of the Week,  John Wilson conducts music by Gershwin

The John Wilson Orchestra follow up their acclaimed Cole Porter in Hollywood album with this tribute to America’s iconic songsmith team — the Brothers Gershwin — and their successes for the silver screen.

The film tunes George and Ira wrote didn’t just serve their cinematic vehicles; they swiftly became standards in their own right.

Recorded live at the Royal Albert Hall in 2015, the culmination of their successful thirteen-date 2015 national concert tour Gershwin In Hollywood reminds us not only of the genius that were the Gershwin, but also the impeccable ability of the John Wilson Orchestra to transport us seamlessly to the golden age of the silver screen.

John Wilson says “Irving Berlin famously remarked 'we were all pretty good songwriters but George was something else: he was a composer'.

“After Gershwin's death in 1937, his brother Ira fashioned new lyrics to some of George's existing melodies and several of these songs are included on the album, as well as a wealth of posthumous adaptations made by the star arrangers and orchestrators of the Hollywood movie studio music departments”

The story of Gershwin in Hollywood makes for what could be a great script itself. “Rumours about highbrow music ridiculous — Stop — Am out to write hits” so wrote George Gershwin in 1936 to the agent Archie Selwyn, who had informed the composer that his Hollywood producers had the jitters. Why? Because the previous year, George and his lyricist elder brother Ira had done something unprecedented by leaping from multiple Broadway musical hits to the considerably more rarefied world of opera with Porgy and Bess.

The producers needn’t have worried. The songs that George and Ira wrote for the picture in question, Shall We Dance, didn’t just serve the movie, they swiftly became standards that are still regularly performed, from “Let’s Call The Whole Thing Off” to “They Can’t Take That Away From Me”.

It’s no surprise that they wound up in Hollywood. When sound and song arrived in motion pictures at the end of the 1920s, two things rocketed to the front of producers’ minds: musicals would be the next big thing and the Gershwins would be hired, since by January 1928 they were the toast of New York’s jazz age.

Just four years earlier, they’d made it to Broadway with their first show together, Lady, Be Good!. It made stars out of its brother-and-sister duo Fred and Adele Astaire and introduced songs that became classics in the title number and “Fascinating Rhythm”. By the time Hollywood came calling, the brothers had plenty more under their belts including “Someone To Watch Over Me”, “Funny Face”, “‘S Wonderful”, “Let’s Kiss And Make Up” and “How Long Has This Been Going On?”.

For their first trip west in 1930 they were paid an immense amount (George $70,000 and Ira $30,000 — together around 1.4 million dollars in today’s terms) but the movie, Delicious, signally failed to live up to its title. They headed back home as fast as possible.

Their return to Hollywood was happier. Shall We Dance, released in May 1937, saw them re-teaming with Fred Astaire. Six new songs made it into the film, including “They Can’t Take That Away From Me”, which wound up being Oscar-nominated. George also wrote the movie’s orchestral underscoring, a job traditionally handled by studio music staff. They then hurled themselves into two more movies, A Damsel in Distress (another Astaire picture) and The Goldwyn Follies.

The fearsome intensity with which George wrote was giving him crippling headaches. At least, that was what his friends and doctors said following years of his complaining plus four days of tests at Los Angeles’ Cedars of Lebanon hospital. He left there on 26 June, 1937. On Friday 9 July he fell unconscious and was re-admitted. A five-hour brain operation in the early hours of Sunday morning revealed an inoperable brain tumour. At 10:35am, he died.

For the movies, this was far from the end. In 1945, Warner Bros. turned his life-story into the biopic Rhapsody in Blue. The best, however, was yet to come. MGM won six Oscars in 1952 including Best Picture for Vincente Minnelli directing Gene Kelly and Leslie Caron in the lavish all-Gershwin-fest An American in Paris. There was equal glamour and dash in Stanley Donen’s satirical romance Funny Face (1957), which teamed Fred Astaire, Audrey Hepburn and Kay Thompson in a score peppered with Gershwin greats.

Most poignant of all was the moment, ten years earlier, when Ira began taking up melodies that George had abandoned and created nine new Gershwin songs for the Betty Grable picture The Shocking Miss Pilgrim. It was a return to the job he had loved for so long: writing lyrics to George’s music.

I don’t believe there is any such thing as a bad Gershwin song, but the very best of them feature in this luxury assortment…and this being a John Wilson album with his eponymous orchestra, they all wear their Sunday best orchestrations from the days when the silver screen shimmered like never before and Fred and Ginger glided across it

The JWO trademarks of shimmering strings, swooning rubato and almost laughably virtuosic brass-playing (check out the trill on a concert high E flat at the end of ‘Treat me rough’!) all give as much pleasure as ever in Gershwin’s music...Dearman’s beautifully introverted account of ‘Someone To Watch Over Me’ is the real show-stopper, and pulls off that rare feat of making a piece of music which verges on being over-exposed seem new-minted and fresh.

[Dearman] and Matthew Ford get the lion’s share of this disc, recorded live at the Royal Albert Hall last year. Their diction is a special treat...The highlight, for me, is Dearman’s wistful How Long Has This Been Going On, but it’s all Wonderful! Marvellous!