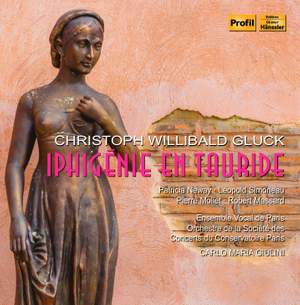 Falling victim to two Richards in the nineteenth century, Richard Wagner and Richard Strauss both reworked and revised Iphigénie en Tauride between 1890 and 1892. + This French masterpiece, although manipulated several times, has withstood the test of time and remained quite popular. + "With outstanding French singers of the nineteen fifties and an eponymous heroine who was brilliant rather than subtle, full justice was done to Gluck's rousing music, not least because of Giulini's impassioned conducting... a MUST for all opera fans" - Opheus Magazine Reviewer

Immediately from the opening, that most remarkable of operatic storm depictions, the dramatic momentum builds up, to be sustained without faltering across the entire span of the four acts. Ponderousness used to be the besetting sin of so-called ‘Classical’ opera; there’s no hint of that here, but neither is there the opposite and equal one of hard driving—shapely lyrical phrasing and sustained dramatic movement go hand in hand. Indeed, the vital instrumental underpinning and theatrically-directed melodic phrasing and support of voices, representative of the best Italian traditions, infuse this Aix performance, undertaken almost entirely by French or native-Francophone singers and players, with a wonderfully unfamiliar warmth of feeling. That makes the set not just ‘historical’ but ‘classic’.