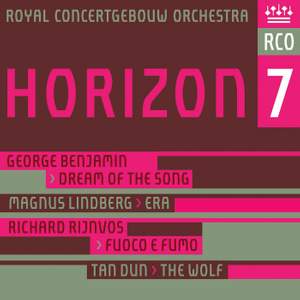 Benjamin’s song cycle … has a warm (and sometimes searing) sensuality which is eloquently projected by Bejun Mehta … Tan Dun’s Wolf… [is] a virtuoso vehicle for bass player Dominic Seldis, and... — BBC Music Magazine, November 2016, 5 out of 5 stars More…

Benjamin, G: Dream of the Song

II. The Multiple Troubles of Man

III. Gazing Through the Night - Casida del Llanto (Casida of the Weeping)

VI. My Heart Thinks as the Sun Comes Up - Casida del Herido por El Agua (Casida of the Wound by Water)

The seventh release in RCO Live's Horizon series features world premieres recorded during three concert seasons. Magnus Lindberg's sumptuous 'Era' – a birthday present from the Concertgebouw Hall to the Royal Concertgebouw Orchestra - dates from the 2012-2013 season. Both Tan Dun's catchy double bass concerto 'The Wolf' and Richard Rijnvos's 'fuoco e fumo' about the 1996 destruction by fire of the Venetian opera house La Fenice, are from 2015. The programme opens with a beguiling 20-minute work for countertenor, women’s voices and orchestra, 'Dream of the Song', Benjamin’s first work since his ground-breaking opera 'Written on Skin', was premiered in September at Amsterdam’s Concertgebouw by the countertenor Bejun Mehta, the ladies of the Netherlands Chamber Choir and the Royal Concertgebouw Orchestra conducted by its composer. The work sets verse by three major poets who spent formative years in Granada; two Hebrew poets of mid-11th century, Samuel HaNagid and Solomon Ibn Gabirol (sung by solo countertenor in English versions by Peter Cole), and Gabriel Garcia Lorca (sung by the female chorus in the original Spanish). Commissioned by the Royal Concertgebouw, BBC and Boston Symphony Orchestras and the Festival d’Automne, the work received its UK premiere on 18 March with Iestyn Davies, the BBC Singers and BBC Symphony Orchestra conducted by Oliver Knussen.

Benjamin’s song cycle … has a warm (and sometimes searing) sensuality which is eloquently projected by Bejun Mehta … Tan Dun’s Wolf… [is] a virtuoso vehicle for bass player Dominic Seldis, and like everything else on the CD, is immaculately recorded and expertly performed

channelling the spirit of Sibelius, not only in that obvious homage to the 4th Symphony a century earlier, but also in the way Lindberg layers tempos; an apparently fast speed in the foreground while the foundations below move with a kind of glacial inevitability.

The true wonder of the RCO’s ‘Horizon’ series is in the sonic journey each record presents. And you’ll want to hear George Benjamin’s Dream of the Song, especially in this almost creepily perfect performance from Bejun Mehta…[the] breathtaking, chameleonic playing from Seldis that tells you why he’s this incredible orchestra’s principal

Mehta…is alive to the sense of every syllable. The whole performance projects Benjamin’s soundworld and its luxurious interplay between instruments and voices far more vividly than it came across at the Barbican; it’s easily the most striking score in this collection.