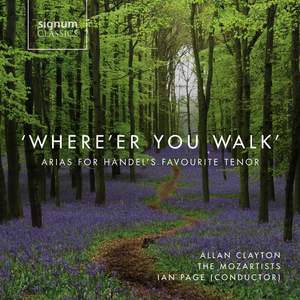 The Mozartists, The Choir of Classical Opera, Ian Page

there’s a guileless beauty of tone in Clayton’s Handel … he is a stylish but not slavish Handelian … led by Matthew Truscott, the string playing is reliably silky, well articulated and quick-witted,... — BBC Music Magazine, August 2016 More…

My fair’s a garden of delight

Let but that spirit

Call forth thy pow’rs

Handel: Jephtha, HWV 70: A father, off’ring up his only child

Smith, J C: The Fairies: Hark how the hounds and horn

Classical Opera explore a wealth of arias by Handel and his contemporaries William Boyce, John Christopher Smith and Thomas Arne, all of which were composed for the celebrated 18th-century tenor John Beard (1716-1791). For this recording Allan Clayton steps ably into this role, performing alongside the Orchestra of Classical Opera under Ian Page. The disc also features a duet with Mary Bevan, from Handel’s L’Allegro, il Penseroso ed il Moderato.

there’s a guileless beauty of tone in Clayton’s Handel … he is a stylish but not slavish Handelian … led by Matthew Truscott, the string playing is reliably silky, well articulated and quick-witted, with musky obbligato solos from bassoonist Philip Turbett and oboist James Eastway.

Clayton’s tenor has been getting steadily stronger and more muscular over the past few years, and there’s more evidence of that here...with the added bonus of a cameo from soprano Mary Bevan (‘As steals the morn’) and the skilled support of Ian Page and The Orchestra of Classical Opera it’s a very attractive package.

Over the course of this generous selection Allan Clayton proves himself well capable of coping with this range of demands. His well-produced tenor has an arrestingly fresh, almost youthful quality, yet one that at the same time does not preclude masculine virility, as his forthright singing of Theseus’s hunting song from John Christopher Smith’s The Fairies and the heroic tones he summons up in Artabanes’s ‘Thou, like the glorious sun’ from Arne’s Artaxerses convincingly demonstrate.