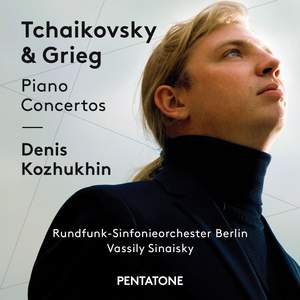 Out of repertory that has been celebrated, picked over and just about played to death over the course of almost a century and a half, they create magic…of course, this could only be achieved... — Gramophone Magazine, May 2016 More…

This new PENTATONE release of Edvard Grieg’s Piano Concerto in A minor, Op. 16 and Peter Ilyich Tchaikovsky’s Piano Concerto No. 1 in B-flat minor, Op. 23 marks the start of the musical collaboration between the label and the young Russian pianist Denis Kozhukhin. Kozhukhin established himself on the international concert scene after winning prizes at the 2006 Leeds International Piano Competition, as well as the 2010 Queen Elisabeth Competition.

‘I am thrilled to have the opportunity to record repertoire that has played a significant part in my musical life’ says Kozhukhin about this recording, made with the Rundfunk-Sinfonieorchester Berlin, conducted by Vassily Sinaisky. Kozhukhin chose two concertos that against all odds, both turned out to become “virtuoso warhorses”. Grieg is known as a composer with a focus on the more intimate musical genres. His first attempt to compose in a more extensive musical genre, resulted in a symphony of which Grieg himself said it “should never be performed...”. His other attempt however, the Piano Concerto in A minor, brought him world-wide success. Until Tchaikovsky started writing his first piano concerto, piano music had only been of secondary interest to him. As he himself put it: “Basically, I am inflicting violence upon myself by forcing my brain to come up with piano passages”. After seeking professional advice on the composition with his friend and excellent pianist Nikolaj Rubinstein, the latter basically massacred the piece and refused to première it. Fortunately Tchaikovsky then decided to dedicate it to German pianist Hans von Bülow, who later on gave it its triumphant première. Nowadays these two concertos rank among the most magical in the piano repertoire.

Out of repertory that has been celebrated, picked over and just about played to death over the course of almost a century and a half, they create magic…of course, this could only be achieved by deeply cultivated musical instincts and a technique as developed and varied as it is unobtrusive. His inerrant rhythmic sense is pliant yet taut; his sound unalloyed silver. Listening to Kozhukhin, you’re left with one thing: the music – incontestable, complete