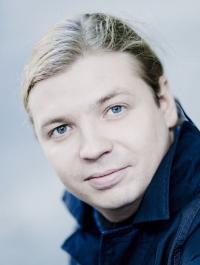 The Russian pianist Denis Kozhukhin was born into a musical family in Nizhny Novgorod in 1986 and studied primarily in Madrid, where his teachers included Dimitri Bashkirov and Claudio Martinez-Mehner. In 2006 he won Third Prize at the Leeds International Piano Competition, and four years later came first in the Queen Elisabeth Competition. In 2013, his recording of three of Prokofiev’s War Sonatas was released on Onyx, and was praised in BBC Music Magazine for the ‘revelatory detail’ of Kozhukhin’s interpretations. His debut concerto album of Grieg and Tchaikovsky on Pentatone followed in 2016, and was a Gramophone Editor’s Choice thanks to his ‘deeply cultivated musical instincts and a technique as developed and varied as it is unobtrusive’. His discography also includes Strauss’s Burlesk, Ravel and Gershwin concertos with the Orchestre de la Suisse Romande, and Brahms’s Ballades and Fantasies, all on Pentatone.