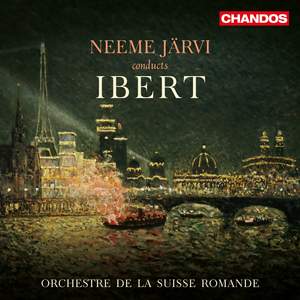 This disc reveals much of interest to explore beyond the familiar items. Feérique sparkles, and the symphonic suite Paris finds Ibert at his most inventive, mixing jazzy playfulness with suave... — BBC Music Magazine, June 2016, 4 out of 5 stars More…

Neeme Järvi and the OSR continue their exploration of French orchestral music with this fourth album: a merry collection from the best of the vigorously ebullient music of Jacques Ibert. Among the numerous winners of the famous Prix de Rome between its institution by Napoleon in 1803 and its abandonment in 1968, the twentieth century provides us with repertoire works from only one composer: Jacques Ibert, whose characteristically clear orchestration is emphasised by strong melodic lines and supported by lively ostinato patterns in the bass. At the same time, the album reveals what an eclectic composer Ibert was. The contrast between his two best-known pieces is a perfect example: Divertissement, for small orchestra, is light-hearted, even frivolous; Escales..., on the other hand, is a ripely romantic work for large orchestra. Like the previous recordings in this series, the unique acoustic of Geneva’s Victoria Hall is perfectly captured in surround sound on this SACD.

This disc reveals much of interest to explore beyond the familiar items. Feérique sparkles, and the symphonic suite Paris finds Ibert at his most inventive, mixing jazzy playfulness with suave exoticisms…the highlight, though, is Escales, which finds Järvi and the Orchestre de la Suisse Romande on top form and benefiting from recorded sound that is wonderful on CD and outstanding on SACD.

Ibert emerges from it all as a fine composer, whose unity lies in his almost impudent diversity, and who is often far from frivolous as some have maintained. And the disc allows Järvi to show off his Swiss orchestra to perfection. Very fine.