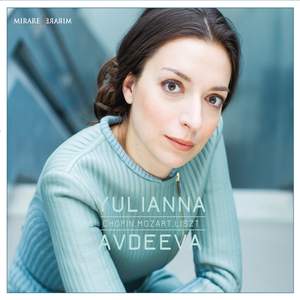 very clear-sighted playing; there’s nothing fluffy or sugar-coated about it, it’s muscly where it needs to be, — CD Review, 2nd July 2016 More…

After her first solo CD of Schubert, Chopin and Prokofiev, released on Mirare in 2014 to enthusiastic acclaim from the press, Yulianna Avdeeva recorded her new disc with the legendary German sound engineer, Andreas Neubronner in the marvellous concert hall Reitstadel Neumark, To conclude this beautiful recital, she chose to record the amazing Liszt transcription from 'Aida' by Giuseppe Verdi… Yulianna Avdeeva began her piano studies at the age of five with Elena Ivanova at Moscow’s Gnessin Special School of Music and later studied with Konstantin Scherbakov and with Vladimir Tropp. She won First Prize in the Chopin Competition in 2010 and her artistic integrity is rapidly ensuring her a place amongst the most distinctive artists of her generation.

very clear-sighted playing; there’s nothing fluffy or sugar-coated about it, it’s muscly where it needs to be,

it is Paul Berthier’s offertory Justorum aniame in manu Dei that stands out, wit its mixture of plainchant and modern sonorities. Jehan Alain’s Messe modale, delicately scored for soprano, alto, flute and strings, is French eloquence at its best.

Avdeeva’s Chopin Fantaisie is polished, scrupulously blended in tone and intelligent in its articulation: playing of considerable poise and taste, which certainly never uses the music as the vehicle for an inflated ego…her Mozart is strongly projected, full-sized hall playing, unimpeachable in its combination of clarity, energy and elegance

There are flashes of unquestionable brilliance in her playing.