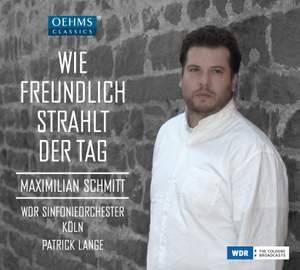 How Friendly the Day Shines

Maximilian Schmitt discovered his love for music already during his youthful years with the Regensburg Boys’ Choir. It was still during his period in Munich that Maximilian Schmitt made his debut at the Salzburg Provincial Theatre as Tamino in The Magic Flute before accepting a four-year engagement with the Mannheim National Theatre.

In the meantime, Maximilian Schmitt sings in all the major opera houses.

The present recording is already his third CD for OehmsClassics.

Following Heine Lieder and Die Schöne Müllerin, Maximilian Schmitt proves with this recording that he hardly needs fear any competition in the area of romantic arias by composers ranging from Flotow and Weber to Wagner. He is sensitively supported by the WDR Symphony Orchestra Cologne under the direction of Patrick Lange.