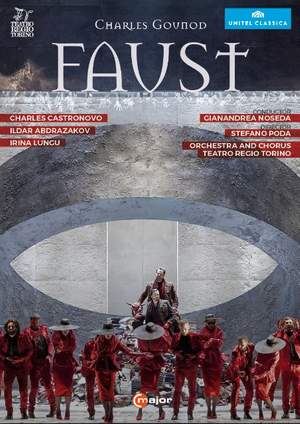 Gianandrea Noseda does a superb job in highlighting the dramatic sweep as well as the refined detail of Gounod’s most popular score, drawing taut playing from the theatre’s orchestra…there’s... — BBC Music Magazine, June 2016, 3 out of 5 stars More…

Premiered in Paris in 1859, Gounod’s Faust was an instant success and even today remains one of the most popular of all French operas. Its libretto was based on Michel Carré’s adaptation of his own stage play Faust et Marguerite, which in turn was loosely fashioned after Goethe’s two-part tragedy. By placing a giant black ring centre-stage that casts an ominous shadow over the singers and dominates the action, director, set and costume designer Stefano Poda has moved the storyline of the restless searcher Faust, to an abstract, seemingly futuristic hall, thereby ensuring that the most fascinating stage moments are not due only to sophisticated lighting. Thanks to the excellent and enthusiastic cast, Poda deftly guides the opera to triumph. Charles Castronovo in the title role is especially convincing, with his brilliant acting and mellifluous singing. Russian bass Ildar Abdrazakov – a regular in all major opera houses around the world – stars as the demonic Méphistophélès. As the innocent young girl Marguerite we see Moldovan soprano Irina Lungu, who demonstrates her ability with crystal-clear timbre.

Gianandrea Noseda does a superb job in highlighting the dramatic sweep as well as the refined detail of Gounod’s most popular score, drawing taut playing from the theatre’s orchestra…there’s a high standard of singing from Charles Castronovo’s warmly lyrical Faust, Irina Lungu’s sentient and accomplished Marguerite [and] Ildar Abdrazakov’s grandly ironic Méphistophélès

Stefano Poda’s production is heavy on symbolism, yet is stylish and enthralling…[Noseda] leads a taut performance, drawing fine playing from his orchestra…there’s a lovely burnished quality to Castronovo’s Faust and he sings a fine ‘Salut, demeure chaste et pure’…Abdrazakov’s Méphisto is suave, with plenty of panache

Stefano Poda’s visually striking Faust makes a fine transition from stage to screen aided by the video director Tiziano Mancini. Poda’s concept—and Gounod’s music—is well served by the presence in the pit of Gianandrea Noseda. Conducting with vim and verve despite coming to the score for the first time, he sculpts a secure sense of narrative arc and has a deft way with telling details, able to switch from the intimate to the epic, the mundane to the demonic with graceful flair.