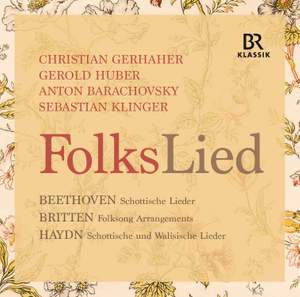 Word-lively, supple and instinctive of inflection, Gerhaher is the perfect voice for a song such as Haydn’s ‘Flow gently, sweet Afton’…and his command of both English and Lallans Scots is formidable…[the... — BBC Music Magazine, July 2016, 4 out of 5 stars More…

No. 3. How sweet the answer

No. 1. Avenging and bright

No. 16. Could this ill world have been contriv'd

As a Lied interpreter, on the concert stage and, increasingly, on the operatic stage as well, the baritone Christian Gerhaher is currently setting new artistic standards. After publication of two choral-symphonic recordings with this exceptional singer, BR-KLASSIK now presents a Lieder CD containing recorded material from Gerhaher's time as Artist in Residence with the Symphonieorchester des Bayerischen Rundfunks. Gerhaher's finely coordinated programme –ambiguously entitled "folkslied" – examines the exciting contrast between the Volkslied(folk song) and the Kunstlied (art song). It contains the rarely heard Folk Song Arrangementsby Benjamin Britten, the folk song arrangements for piano trio and voice by Beethoven and Haydn. Gerhaher's decision to use German texts to Haydn's melodies that were published inthe 1920s represents a tribute to Fritz Wunderlich, whose first recording of the German text versions is particularly close to his heart. The instrumental partners are: Gerold Huber, Gerhaher's longtime accompanist; Sebastian Klinger, the principal cellist of the Symphonieorchester des Bayerischen Rundfunks who is currently pursuing a solo career; and, on the violin, Anton Barachovsky, leader of the Symphonieorchester.

Word-lively, supple and instinctive of inflection, Gerhaher is the perfect voice for a song such as Haydn’s ‘Flow gently, sweet Afton’…and his command of both English and Lallans Scots is formidable…[the recording] is enhanced by the violin and cello playing of Anton Barachovsky and Sebastian Klinger, and the always sentient piano accompaniments of the faithful Gerold Huber.

Best of all are the bittersweet, sometimes disturbing Britten arrangements that form the recital’s centrepiece. In beauty of tone and sensitivity to text and mood, Gerhaher’s vividly ‘lived’ performances are a match for any of his baritone predecessors, British or German…Gerold Huber’s playing is in the Britten class (in his recordings with Pears) for colour, point and wry inventiveness

[These arrangements are] delightful and share characterful piano trio accompaniment, here superbly played. Gerhaher is in fine voice throughout, and his English (and Scottish!) is idiomatic and convincing.