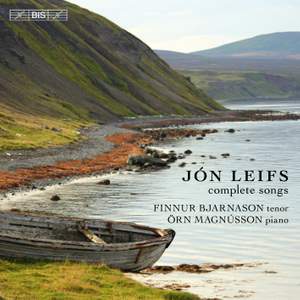 This entire collection is dark, thrilling and terrifying. Leifs has a direct way with melody, which despite its irregularities often has a pleasing, Reger-like geography…at his best, Finnur Bjarnason... — Gramophone Magazine, May 2016 More…

No. 2. Húskarlahvöt (Exhortations to the Farmhands)

No. 1. Sofðu, unga ástin mín (Slumber Dearest Child of Mine)

No. 2. Breiðifjörður (Fjord of a Thousand Islands)

No. 3. Haugskviða Gunnars (Gunnar’s Verse from His Mound)

No. 2. Draugadans (Dance of the Spectres)

No. 3. Hrafnsmál (The Words of the Raven)

Something of a cult figure, Jón Leifs is especially known for spectacular orchestral works often inspired by the natural phenomena of his native Iceland – such as volcanoes (Hekla) or waterfalls (Dettífoss) – or the great Icelandic sagas (Saga Symphony, and the large-scale, unfinished Edda oratorio). But throughout a turbulent life, Leifs also composed a number of solo songs all of which are gathered here. Many of these 32 songs (including several folk song arrangements) give unusually clear insights into the composer: more than Leifs’ work in any other genre, his song writing was often inspired by deeply personal events in his life, and consequently span a huge range of emotion and expression, from delicate lullabies to the most forceful of epic songs. This is brought out by Finnur Bjarnason and Örn Magnússon, both stalwart champions of the music by their compatriot in concert and on disc. Bjarnason has previously appeared on BIS in the substantial Gróa’s Spell for alto, tenor and orchestra (BIS1080), while Magnússon has recorded Leif's complete piano music for the label. The present performances were originally released on the Smekkleysa label, in 2001, as a two-disc set. For this release they have been remastered and combined on a single disc by BIS Records, in the hope that they will reach a new and wider audience, serving as an introduction to and deepening the understanding of a highly individual voice in twentieth-century music.

This entire collection is dark, thrilling and terrifying. Leifs has a direct way with melody, which despite its irregularities often has a pleasing, Reger-like geography…at his best, Finnur Bjarnason is magnificent. He has the breakaway lyricism of a verismo character and the in-your-ear intimacy of a Lieder singer…anyone who has been fascinated or troubled by the stark black rock on which Iceland is built should find plenty to reflect on here