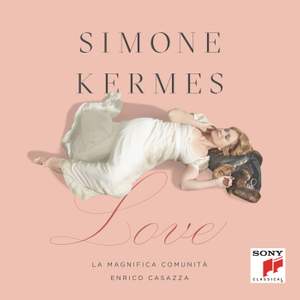 The evidence of [Kermes’s] close sympathy with the players of La Magnifica Comunità is everywhere abundant…the sum total, powerfully original and committed in imaginative endeavour and fulfilment,... — BBC Music Magazine, June 2016, 3 out of 5 stars More…

Purcell: Thy Hand Belinda ... When I Am Laid in Earth (Dido's Lament)

A collection of beautiful baroque and renaissance love songs that reflect the versatility of love – passionate, dramatic and addictive by the most popular composers of this time, from Monteverdi, Purcell, Cesti to Merula and Dowland.

Love is Simone Kermes’ most intimate and personal album yet.

The arrangement, cast of instruments, and recording set up is as such that the “pop song” quality, the contemporary and eternal spirit, the immediacy of these compositions is revealed. All sung with the unique legato, pure, and silver quality that makes Simone Kermes’ voice so special.

Simone Kermes is a dramatic coloratura soprano and multi-award winner. For her solo albums she has received a number of international awards, such as the annual award of the Deutsche Schallplattenkritik, the Echo Klassik award for 2011 Female Singer of the Year, the Diapason d`Or, Midem Award, Choc Le Monde de la Musique and Gramophone magazine’s Recording of the Month. In April 2013 she received one of Russia’s highest cultural awards, the Golden Mask, for her performances as Fiordiligi in Mozart’s Così fan tutte at the Tchaikovsky State Academic Theatre in Perm.

The evidence of [Kermes’s] close sympathy with the players of La Magnifica Comunità is everywhere abundant…the sum total, powerfully original and committed in imaginative endeavour and fulfilment, is an inward-looking artistic vision…on its own terms undeniably fascinating

Kermes barely engages her support for much of the repertoire, preferring an intimate, white, often breathy delivery…accompaniments are treated freely, and many works are newly arranged to bring a more folky, unplugged sort of atmosphere…most successful, though, are the dramatic recitatives and ariosos that demand Kermes finally release something closer to her full voice, showing off the agility and vocal rhetoric that is her greatest strength

the sweet pain of unrequited love and the deeper despair of lost love dominate this selection, which opens with a sublime reading of Monteverdi's 'Lamento della ninfa' in which Kermes' delivery balances perfect enunciation with beautiful abjection