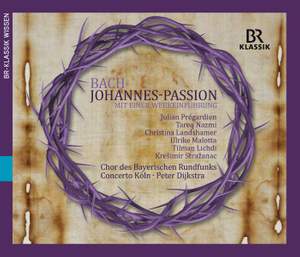 The Bavarian Radio Choir is a tightly-disciplined outfit, urgent and dramatically engaged in the crowd scenes, and Dijkstra…is well served throughout by the ever-attentive expertise of Concerto... — BBC Music Magazine, May 2016, More…

The music of Bach's 'St. John Passion', which the composer wrote for Holy Week in 1724 immediately after his appointment as cantor of St Thomas's Church in Leipzig, still retains all its freshness and vitality nearly 300 years later, and is a true Baroque delight. The two main choruses Herr, unser Herrscher and Ruht wohl, ihr heiligen Gebeine form the beginning and culmination of a large-scale orchestral and vocal structure in which Bach reveals his absolute mastery of polyphony. Inwardly reflective chorales are as much interwoven into the events of the Passion as the haunting arias which comment on the biblical texts of the Gospel of St John. Throughout this solemn Passion oratorio, there is a constant emphasis on Baroque musical magnificence. What makes this live recording of the concert version of March 7, 2015 in the Herkulessaal of the Munich Residenz so special? The fresh voices of the young and excellent vocal soloists, the regularly praised "astonishing three-dimensionality" and "crystalline clarity" of the Chor des Bayerischen Rundfunks under the direction of Peter Dijkstra and, of course, the renowned period instrument ensemble Concerto Köln.

The Bavarian Radio Choir is a tightly-disciplined outfit, urgent and dramatically engaged in the crowd scenes, and Dijkstra…is well served throughout by the ever-attentive expertise of Concerto Köln. Among the soloists Tareq Nazmi's Jesus is a quietly noble presence…while best of all is Christina Landshamer's 'Ich folge dir gleichfalls': effortless, light as a feather and radiating exquisite joy

[From the outset] the driving bass-lines, turbulently swirling strings, wailing oboes and crisp harpsichord continuo of Concerto Köln establish this as an emotionally engaging performance. The Bavarian Radio Chorus’s disciplined precision in vigorous fugues and vividly characterised turba choruses will appeal to those who like some old-fashioned gutsiness and broad sonorities