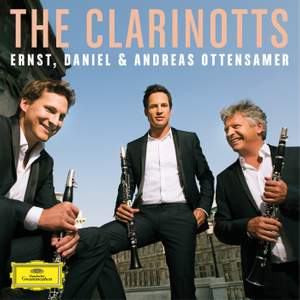 an engaging and joyous experience...As well as the natural rapport that comes from a lifetime of music-making together, the Ottensamers are also old hands at arranging and extemporising existing... — Katherine Cooper, Presto Music, 1st January 2016 More…

The family ensemble was born when Daniel and Andreas were children and the family played music together at home. In 2005, The Clarinotts established themselves as a professional touring ensemble.

The major label debut album The Clarinotts features some of the most virtuosic music ever written for clarinet – arranged for 2-3 soloists and orchestra or piano – with repertoire ranging from Mendelssohn and Mozart to Bonfa's film music classic Manha de Carnaval, and a new piece 'Cinema I' written for The Clarinotts.

The Clarinotts will be featured with two pieces from the album in this year’s Vienna New Year’s Day concert TV Broadcast intermission film, which will be broadcast to over 70 countries on the 1st January.

an engaging and joyous experience...As well as the natural rapport that comes from a lifetime of music-making together, the Ottensamers are also old hands at arranging and extemporising existing works to suit their forces, and so it’s hardly surprising that many of the tracks here have the same quasi-improvisatory quality that made The Hungarian Connection such a roaring success.

the Ottensamers, who play their distinctly Viennese instruments with terrific brio, sound delightfully animated and some of the ensemble work is so virtuosic that it sounds as if there must be at least four of them rather than three.