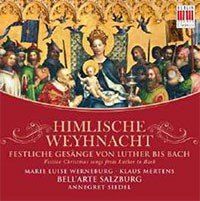 For 20 years now, Bell'Arte Salzburg has been one of the leading ensembles for period performance practice and is seen as a first choice for early music of the 17th and 18th centuries. Intensity of expression, lively playing and persuasive programming have won an exceptional reputation for the ensemble, which has already appeared in concert series and at festivals all over Europe. For its new album 'Himlische Weynacht', the musicians under the direction of Annegret Siedel went in search of the most impressive and moving works of Luther's Day. Luther's tunes and texts were gladly and copiously used in Christmas hymns. Vocal support for Bell'Arte Salzburg in the choral works comes from young soprano Marie Luise Werneburg and the well-known bass Klaus Mertens, two exceptional vocal soloists in this genre. In consort with the ensemble, they perform a highly varied round of festive airs, adding detail to our mental picture of Luther's time with their musical representation of a Christmas celebration in those days.