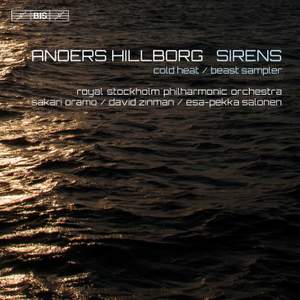 Rich, sonorous playing from Oramo's orchestra under all three conductors, and singing full of purity, accuracy and fresh air above it; both soloists are agile, strong and able to tell a story.... — Gramophone Magazine, February 2016 More…

The works recorded here testify to the widespread international interest in the music of the Swedish composer Anders Hillborg. Two purely orchestral works, Beast Sampler and Cold Heat, frame the brief and emotionally concentrated song O dessa ögon for soprano and strings, and demonstrate Hillborg's expert handling of the forces of the large symphony orchestra, often described by him as a 'sound animal'. Sirens, the closing and culminating work on this disc, is also Hillborg’s largest work to date in terms of both scoring and duration, and its emotional depth is unmatched in his output. Inspired by the dangerous yet alluring sirens in Homer's Odyssey, Hillborg has constructed a score and libretto in which the sirens – two soprano soloists and a large mixed choir – with increasing desperation attempt to manipulate Ulysses. Performing this colourful programme is the Royal Stockholm Philharmonic Orchestra, joined by the sopranos Ida Falk Winland and Hannah Holgersson and two of Sweden's foremost choirs, the Eric Ericson Chamber Choir and the Swedish Radio Choir. The performances are led by three different conductors: the eminent trio of Sakari Oramo, David Zinman and Esa-Pekka Salonen, dedicatees of the works they conduct here.

Rich, sonorous playing from Oramo's orchestra under all three conductors, and singing full of purity, accuracy and fresh air above it; both soloists are agile, strong and able to tell a story. But that all comes from what Hillborg writes for them. Sirens should be heard.

[this music] is unpacked with great care by Esa-Pekka Salonen, with Ida Falk Winland and Holgersson as the entwining soprano soloists. All the Royal Stockholm Philharmonic performances, under Sakari Oramo for Beast Sampler and O Dessa Ögon and David Zinman for Cold Heat, are first-rate; there seems to be no doubt that orchestras enjoy playing Hillborg’s music.