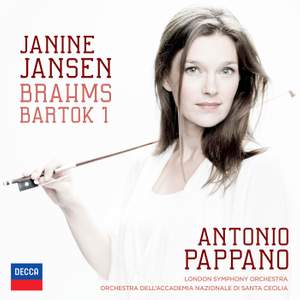 The Bartok is a revelation.Somehow Jansen manages to coax this music out of its accustomed reticence, but without any sense of forcing it…at last, this concerto really does sing of unrequited... — BBC Music Magazine, March 2016, 5 out of 5 stars More…

“As far as I know, the Brahms Concerto and Bartók’s First have never been coupled together before on disc,” enthuses Janine Jansen during recording sessions for this album, “but to me they seem a natural pairing. They may speak a different kind of musical language, yet they not only share a Hungarian connection, but also a profound combination of symphonic power and chamber-scale intimacy.”

Brahms’s (and Liszt’s) Hungarian inspiration stemmed directly from nineteenth-century gypsy bands, whose racy, seductive dance music cast an intoxicating spell over the sensation-hungry audiences of the time. Béla Bartók took a more radical view, and having declared passionately during his student years “All my life … I shall have one objective: the good of Hungary and the Hungarian nation”, joined his friend Zoltán Kodály collecting native Hungarian and Transylvanian folksongs in the field, noting them down on manuscript and recording them on a primitive gramophone as they went along. As time went by, the natural melodic contours and quirky rhythmic inflections of indigenous Hungarian folk music became an indissoluble part of Bartók’s own unique creative style.

The Bartok is a revelation.Somehow Jansen manages to coax this music out of its accustomed reticence, but without any sense of forcing it…at last, this concerto really does sing of unrequited love, well aided by the warm and beautifully balanced recording.

Jansen gives us a lyric reading [of the Brahms] of rare inwardness and beauty...it is a performance that marries meditation with motion, such is the suppleness of Jansen’s and Pappano’s feel for the concerto’s larger symphonic movement and the hand-in-glove relationship that exists between soloist, conductor and Pappano’s superbly responsive Santa Cecilia orchestra.

Jansen never resorts to flashy display for its own sake; and even in the midst of the [Bartók's] Allegro giocoso she finds space for some beautiful cantabile playing. I was particularly struck by some of her legato double-stopping – making this sound smooth is no mean feat, but in Jansen’s hands it sounds as natural as if it were a duet.

[The Santa Cecilia Orchestra's] sound is rich and weighty, the better to support Jansen’s interpretation, itself heavyweight yet characteristically mercurial. Jansen’s playing glows, and the second theme of the first movement really sings; here and throughout, there is the feeling that Jansen wants every phrase to say something.

The interpretation of the Brahms represents a true meeting of minds: Jansen possesses all the intellectual authority and expressive weight that the first movement requires, yet this is tempered by the wonderful spectrum of tone and the fluidity of pulse she can summon in the slow movement...Altogether a highly desirable disc.