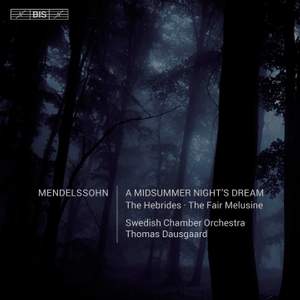 [In] subtle parody and deadpan wit, Dausgaard has a kinship with Klemperer's particular approach to [A Midsummer Night's Dream]…like Masur, and few others, Dausgaard finds a true andante rather... — Gramophone Magazine, January 2016 More…

Following a series of acclaimed recordings of 19th-century music including complete cycles of the symphonies by Schubert and Schumann, Thomas Dausgaard and his Swedish Chamber Orchestra turn to Felix Mendelssohn. The team’s latest offering unites three of the composer's four celebrated concert overtures, written between 1826 and 1835 and setting new standards for this emerging genre. The earliest of the three – A Midsummer Night’s Dream – was composed by Mendelssohn at just seventeen, and his sister Fanny later remarked how Shakespeare's play had been a constant presence at their home, and how ‘at various ages we had read all the different roles, from Peaseblossom to Hermia and Helena…’ The overture immediately became one of Mendelssohn’s signature pieces, and seventeen years later he returned to it, composing additional incidental music for a stage production of the play. Written for soloists, women's choir and orchestra, the complete Midsummer Night score is included here. The disc opens with the last of the four overtures to be composed, however: The Fair Melusine, which Mendelssohn wrote after having heard an opera based on the old French tale of the water spirit Mélusine and her sad fate. Actively disliking the opera, Mendelssohn was provoked into his own musical setting of the subject matter in the form of a concert overture. Water – and its depiction in music – also plays an important role in The Hebrides, the closing work on the present recording. Inspired by the poems by Ossian – which captured the imagination of an entire generation at the beginning of the Romantic era – Mendelssohn visited Scotland and the Hebrides in 1829, and already during this trip he sent a postcard to his family, with the overture's famous opening written down in a four-part setting.

[In] subtle parody and deadpan wit, Dausgaard has a kinship with Klemperer's particular approach to [A Midsummer Night's Dream]…like Masur, and few others, Dausgaard finds a true andante rather than adagio for [the Nocturne]; but, unlike Masur, he also takes heed of the qualifying tranquillo in the passing clouds of the central section…is this disc the overture to a symphony cycle? I hope so.

The performance captures the idea of flitting, frenetic activity in a parallel world, activity we are not sure is entirely benign, yet does so without the ideal gossamer lightness Mendelssohn’s writing demands.