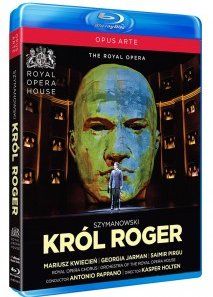 all the imagination of Kasper Holten's production coheres compellingly, and Antonio Pappano shapes an extremely lucid performance that somehow manages to be taut and lush at the same time. Mariusz... — BBC Music Magazine, February 2016, 5 out of 5 stars More…

Kasper Holten’s production (The Royal Opera’s first) of Król Roger (King Roger) brought the opera back to the London stage after an absence of almost 40 years. Karol Szymanowski’s masterpiece powerfully presents the dilemmas of culture versus nature and man versus beast, and movingly depicts King Roger’s inner struggles as he moves from an impossible life of repressed desires to the other extreme, giving in to his own demons. Meanwhile Roger’s people, seduced by the promises of the mysterious Shepherd, are drawn towards totalitarianism and repression. Antonio Pappano conducts Szymanowski’s opulent and beautiful score, with a cast including Mariusz Kwiecien as Roger (one of the greatest interpreters of the role today), Saimir Pirgu as the Shepherd, and Georgia Jarman in her Royal Opera debut as Roger’s loving queen Roxana.

Extra features: Introduction to Król Roger, The sets, The music, and a Cast Gallery

all the imagination of Kasper Holten's production coheres compellingly, and Antonio Pappano shapes an extremely lucid performance that somehow manages to be taut and lush at the same time. Mariusz Kwiecien's warm account of the title role shows why he has become today's ruling King Roger, and Saimir Pirgu is suitably seductive as the Shepherd. Best of all, as Roxana, Georgia Jarman shows how the queen's Act II vocalise can be one of the most beautiful arias in all opera.

True, it's not dazzling subtle. Nor is Szymanowski's music, however, captured here by Antonio Pappano with superb attention to both the iridescent orchestration and - more tricky this - its theatrical energy. The orchestra play with silky finesse and the chorus are on especially dazzling form for the intoxicating climaxes.