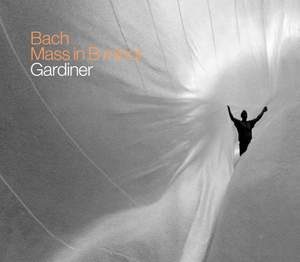 Gardiner’s second recording of the B minor Mass is a predictably exhilarating experience. The opening Kyrie, paced to perfection, leaves one amazed afresh…the chorus (which supplies the mostly... — Sunday Times, 17th January 2016 More…

The Monteverdi Choir and English Baroque Soloists are renowned of their spectacular performances of Bach’s epic masterpiece, which they have toured extensively.

During their last tour (in Munich, Frankfurt, Lucerne, Aix-en-Provence and Paris) there was a stampede for tickets and they performed every night in full houses, to spellbound audiences.

This album is the culmination of the tour: it was recorded in an open session in London, and captures the special atmosphere of the concerts

It is presented in a 2-CD casebook and contains a booklet featuring original notes by John Eliot Gardiner translated in English, German and French.

Gardiner’s second recording of the B minor Mass is a predictably exhilarating experience. The opening Kyrie, paced to perfection, leaves one amazed afresh…the chorus (which supplies the mostly fine soloists) is its usual splendid self

there are special moments, especially in more homophonic writing like ‘Et incarnatus’, sung by the Monteverdi Choir with rapt concentration. The playing of the EBS, too, is outstanding

Thirty years on, Gardiner’s take on the mass is if anything more exuberant, more joyful than his famous Archiv reading: all concerned seem to share this vision, especially the soloists who step forward from the choir. Textures are all crystal clear, part in thanks to a superbly natural, warm recording. Essential listening.