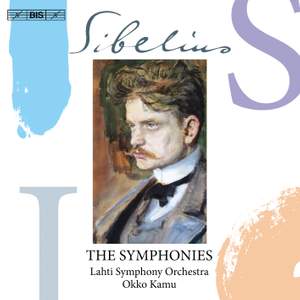 Kamu offers an [easy] sense of movement… intense quiet dynamics and clarity in perfect equilibrium with atmosphere. There's plenty of excitement too: the scherzo of the Second is truly vivacissimo…Three,... — BBC Music Magazine, December 2015 More…

Recording of the Week,  Sibelius Symphonies from Okko Kamu and the Lahti Symphony Orchestra

James listens to Sibelius from Okko Kamu and the Lahti Symphony Orchestra.

During this 150th anniversary year of Jean Sibelius, his music is being performed and discussed more widely than ever. As might be expected, the Lahti Symphony Orchestra, noted for its numerous and often revelatory Sibelius recordings, is planning its own homage: all seven symphonies will be performed at the 2015 edition of the orchestra’s annual Sibelius Festival. With principal conductor Okko Kamu the Lahti SO has also prepared a special birthday present for their great compatriot. Recorded between 2012 and 2014 this new anniversary cycle is released as a boxed set of three SACDs with a surround sound option, and is accompanied by an ample booklet with informative notes by Andrew Barnett, author of a Sibelius biography. Kamu first came to international notice when he won the Karajan Competition in 1969 and later conducted the Berlin Philharmonic and the Finnish Radio Symphony Orchestra in the first three of Sibelius's symphonies for inclusion in Karajan's Sibelius cycle on Deutsche Gramophone. Needless to say, he has conducted these works numerous times since then, in Finland and abroad, but has never before put his name to a complete cycle on disc. A previous recording by the Lahti/Kamu team may raise certain expectations, however: released in 2011, the recording of Sibelius’s Tapiola and two Tempest Suites was awarded a Diapason d’Or de l’Année, amongst other distinctions.

Kamu offers an [easy] sense of movement… intense quiet dynamics and clarity in perfect equilibrium with atmosphere. There's plenty of excitement too: the scherzo of the Second is truly vivacissimo…Three, Seven and above all Six are just perfect, with all the naturalness I want in these elusive masterpieces.

I think it's the combination of Kamu's thoughtful innovation and the Lahti players' seemingly endless variation of colours that makes this set well worth hearing, and is certainly the most impressive account of these pieces I have heard for quite some time.