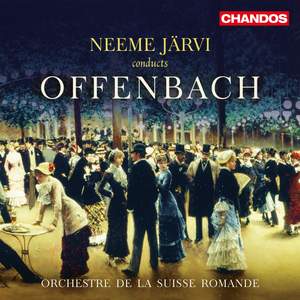 it has a compulsively listenable range of colour and orchestral effects. These are utterly sensible and musical performances…the collection makes for entertaining listening — Gramophone Magazine, November 2015

Neeme Järvi and the Orchestre de la Suisse Romande explore Offenbach’s effervescent music in this third album of their survey of French orchestral works of the nineteenth century – all recorded in Geneva’s historic Victoria Hall.

Although he was born in Germany, it was for Paris (the Bouffes-Parisiens, Palais-Royal, Opéra-Comique, Variétés theatres) that Offenbach composed those works. Their brilliant tunes continue to delight over 130 years after his death. Neeme Järvi, one of the most recorded living conductors, has championed similar repertoire with the OSR, such as the finest orchestral works of Chabrier [CHSA5122] and Massenet [CHSA5137], to critical acclaim.

it has a compulsively listenable range of colour and orchestral effects. These are utterly sensible and musical performances…the collection makes for entertaining listening