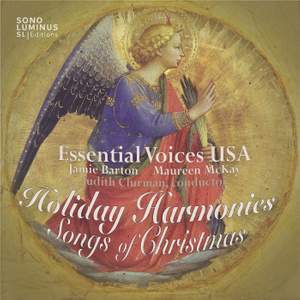 trad.: Angels We Have Heard On High

Essential Voices USA (EVUSA) was featured under Judith Clurman’s baton in the NBC 2014 telecast of Macy’s Fireworks Spectacular. The ensemble performs regularly on the Carnegie Hall subscription series with The New York Pops and produces “The Composer Speaks” series at the DiMenna Space for Classical Music. EVUSA was thrilled to participate in the 2013 Presidential Inaugural activities. EVUSA has recorded two other critically acclaimed CDs for Sono Luminus: Celebrating the American Spirit (DSL 92162) and Cherished Moments: Songs of the Jewish Spirit (DSL92182). Emmy and Grammy-nominated conductor Judith Clurman currently conducts Essential Voices USA (EVUSA), works with the Omaha Symphony on their Sacred Voices concerts, collaborates with the New York Pops at Carnegie Hall, conducts programs at the DiMenna Center for Classical Music, and maintains an active vocal studio in New York City. She has worked with numerous organizations worldwide, and has commissioned works by 65 American classical composers.

The winner of the 2015 Richard Tucker Award, the winner of both the Main and the Song Prizes at the 2013 BBC Cardiff Singer of the World Competition, a winner of the 2007 Metropolitan Opera National Council Auditions and a Grammy nominee, American mezzosoprano Jamie Barton has been described by The Guardian as “a great artist, no question, with an imperturbable steadiness of tone, and a nobility of utterance that invites comparison not so much with her contemporaries as with mid-20th century greats such as Kirsten Flagstad.” Jamie appears with the world’s finest opera companies and symphonic orchestras. She is featured on the CD singing “Silent Night,” “The Virgin’s Slumber Song,” and “We Wish You A Merry Christmas.” Following performances of Susanna in Le nozze di Figaro, the Washington Post hailed soprano Maureen McKay as the "undisputed star of the show," and further exclaimed, "Armed with a silvery, precisely aimed voice, natural stage presence and the kind of beautifully detailed acting you don't see often enough on the operatic stage, McKay turned in a smart, sexy and thoroughly charming performance."