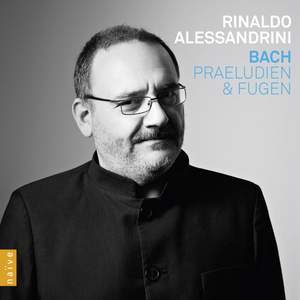 Throughout, an unimpeachable suavity and debonair breeziness informs Alessandrini’s playing which is unfailingly sensitive to Bach’s ‘direction of travel’, be it ‘galant’, learned or songful. — BBC Music Magazine, Christmas 2015, 5 out of 5 stars More…

Prelude and Fugue in G Major, BWV 902a: Prelude

For his first solo harpsichord recording in five years, Rinaldo Alessandrini has selected a very personal selection of preludes and fugues by Johann Sebastian Bach. These short works are not part of 'The Well-Tempered Clavier' and the Roman maestro Alessandrini has connected them by key and by their spirit in order to build a unique recital shedding new light on Bach’s music.

Rinaldo Alessandrini, harpsichordist, fortepianist and organist, in addition to his role as founder-director of Concerto Italiano, has been a presence on the early music scene for some 20 years now. His discography includes not only Italian music, but also composers of the German school. It has garnered the highest critical plaudits, including two Grands Prix du Disque, three Deutsche Schallplattenpreise, and as of 2015 five Gramophone Awards, all for discs with Concerto Italiano. He now records exclusively for Naïve.

“This recording seeks to offer a coherent collection of compositions, unheard of at the time, that differ in both style and period: isolated preludes, brought together in small didactic collections with equally-isolated fugues, that were composed without the introduction that usually preceded them. Much, but not all, of this music dates back to Köthen. It takes us on a journey through different collections: the Clavierbüchlein for Wilhelm Friedmann; the Menpell-Preller manuscript dating 1730-1740 and having belonged to Johann Nikolaus Mempell, a student of Bach; the various ‘Kellner manuscripts’. We have coupled ‘preludes and fugues’ according to their tonality and assembled them using contrasting criteria.” Rinaldo Alessandrini

Throughout, an unimpeachable suavity and debonair breeziness informs Alessandrini’s playing which is unfailingly sensitive to Bach’s ‘direction of travel’, be it ‘galant’, learned or songful.

A thoughtful volume of Bach vignettes, sensitively mined and performed with devotion

the spaciousness in his playing, as you also hear in his orchestral conducting is really well shown off … it has all those beautiful broken chords that are just very simply charting this harmonic patter that’s completely unpredicatable but under his fingers it becomes really joyously inevitable