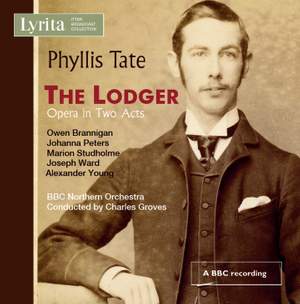 The Lodger, Act I: No Fire Again Tonight, Emma?

The Lodger, Act I: Whoever Can That Be?

The Lodger, Act I: Now, George Bunting, I Haven't Got Time to Sit Here with You

The Lodger, Act I: It Is Evening, a Week Later

The Lodger, Act I: Emma Fusses Half-heartedly With Cushions and Knick-knacks

The Lodger, Act I: Emma has Returned to Her Room

The Lodger, Act II: It Is Very Late the Next Night

The Lodger, Act II: Left Alone, Emma Rocks Herself in Her Chair

The Lodger, Act II: Late Afternoon of the Following Day

The Lodger, Act II: Mr. Bunting... It's Something I Ought to Tell You

The Lodger, Act II: The Lodger Gropes His Way Out of the House

The Lodger, Act II: Epilogue. When Did You Know Who He Was?

Libretto by David Franklin adapted from the novel by Mrs. Belloc-Lowndes.

The Lodger was commissioned by the Royal Academy of Music and first performed there in July 1960. This revised score, adapted for the BBC, was the opera’s first broadcast.

The Lodger forms part of a select group of British stage works with a horrific or supernatural theme. In Tate’s opera, what she referred to as ‘the sinister element’ is subtle and suggested rather than exaggerated or gratuitous and moments of genuine tension are juxtaposed with other non-sensational elements such as the burgeoning romance between Daisy and Joe and the local colour of the chorus’s music hall number. The composer’s natural gift for extended, lyrical lines and her capacity to build and dispel tension assist in lending distinction to an atmospheric and cogently constructed piece of music theatre.

Tate’s firmly-structured score employs a lyrical, natural arioso, intensifying into more formal arias, duets and ensembles at emotional touch-points. Her style is darkly tonal, in the manner of her contemporaries Rawsthorne and Alwyn, while tapping a vein of perky populism reminiscent of the young Malcolm Williamson: the cockney street choruses that punctuate the action are especially effective in that regard, a disconcerting mixture of ‘Roll out the barrel’ and Salvation Army hymnal. Groves paces it perfectly, and he is gifted with superb principals and an excellent chorus.