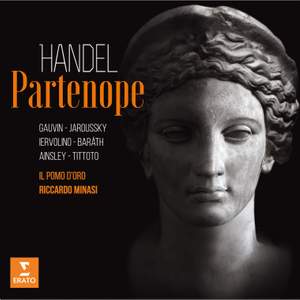 Handel’s sparkling opera Partenope reunites Erato’s star countertenor Philippe Jaroussky and the captivating Canadian soprano Karina Gauvin, who both made such an impact in the Erato recording of Steffani’s rediscovered opera Niobe, released in early 2015 and welcomed as a “landmark event” by Gramophone.

Jaroussky’s Erato catalogue is rich, varied and extensive – and this summer he appeared as Ruggiero in Handel’s Alcina in a spectacular new production at the Aix-en-Provence Festival – but it is some time since he last recorded a complete Handel opera for the label: Faramondo, which was released in 2009. If Faramondo remains something of a rarity on the world’s stages, Partenope – which offers plenty of comedy as Queen Partenope juggles an array of suitors – is a popular work, and in recent years has even enjoyed productions in such large theatres as the San Francisco Opera and English National Opera.

Jaroussky takes the role of Arsace, Prince of Corinth, while Karina Gauvin is Queen Partenope herself. She has superb credentials as a Handelian and has recorded Ariodante (with Joyce DiDonato and the late Alan Curtis) and Giove in Argo (with Ann Hallenberg and Curtis) for Erato. Gramophone has spoken of her “ideal Handelian mix of grace and profound emotional truth,” while the Sunday Times has praised her “glinting soprano, bright-edged yet deliciously rounded and sensual … used with rare understanding for character” and the “sculptural beauty” of her phrasing.

The conductor is Riccardo Minasi, who, with his ensemble Il Pomo d’Oro, also appears on Joyce DiDonato’s bel canto collection, Stella di Napoli and Edgar Moreau’s new Erato album Giovincello. Praising conductor and orchestra for their command of Handel’s operatic style, Forum Opéra has written: “A real drama unfolds from the overture onwards … The conductor brings true brio as he engages with Handel’s rhetoric … The players of Il Pomo d’Oro can switch in a moment from the role of interlocutor to commentator … Add to this a perfect mastery of the way the recitatives lead into the arias, and you have the formula for an approach that remains constantly fresh.”

The rich-voiced Italian mezzo-soprano takes the role of Rosmira – Arsace’s former lover, who is disguised as a man, Prince Eurimene – while the diamantine Hungarian soprano Emőke Baráth takes the role of a real man, Prince Armindo, who is in love with Partenope. “Supremely stylish” were the words used by the Telegraph to describe John Mark Ainsley when he sang Emilio (yet another prince seeking Partenope’s hand) at English National Opera, and the distinguished Italian bass Luca Tittoto brings authority to the role of Partenope’s advisor Ormonte.

Il Pomo d'Oro plays with tremendous attention to detail, as responsive to variations of timbre, articulation and dynamic as the singers...As the siren Partenope, Karina Gauvin brings an easy glamour. John Mark Ainsley is a suave Emilio, brilliant in 'La gloria in nobil alma'...Were the recitatives a touch faster and less deliberate, it would be a perfect performance.

Minasi’s triumphant new recording is so sensitive to the work’s shifting tone – by turns buoyant and light-footed, tender, humorous...and so impeccably cast as to bring this unusual work’s virtues into sharp new focus...Is there a better Handelian soprano than Karina Gauvin currently working?

Gauvin proves captivating, enhancing Handel’s notes with delicious decorations in da capo repeats. Philippe Jaroussky (pictured) is her equal in technical dispatch of the most difficult florid music...Ainsley catches the braggadocio of the invader Emilio to perfection, and the supporting singers...sing as outstandingly as Minasi’s alert period band play.