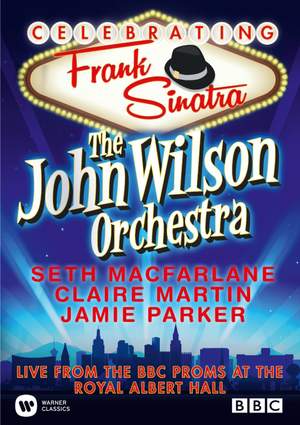 Live at the Royal Albert Hall

Heusen: Come Fly With Me

Carmichael, H: I Get Along Without You Very Well

Rodgers, R: The Boys from Syracuse: This Can't Be Love

Kern: The Folks Who Live on the Hill

Porter, C: From This Moment On

Coates, C: No-one Ever Tells You

Put your dreams away

It Happened in Monterey

If I Had You

The Voice’ … ‘Ol’ Blue Eyes’ … ‘The Sultan of Swoon’: the mythology surrounding Frank Sinatra is overwhelming. A gifted entertainer, screen actor and ubiquitous personality, his real legacy as a pioneer of popular song can sometimes get lost in the clamour. This year the John Wilson Orchestra returns to the BBC Proms at the Royal Albert Hall with a special Late Night Prom celebrating the centenary of this musical icon born 100 years ago in a concert that brings together some of the great voices of our own time. Led by the multitalented Seth MacFarlane, The John Wilson Orchestra’s celebration of Frank Sinatra will be broadcast live on British television (Friday, August 7th BBC Four – 10.15pm) and released on a DVD for Warner Classics in October.

“It is an honour for the John Wilson Orchestra to be returning to the BBC Proms to perform a special late night Prom marking the centenary of Frank Sinatra’s birth and celebrating his legacy” says John Wilson, “The concert focuses on the most important part of his career - the middle years, mainly at Capitol Records, and in particular his collaboration with Nelson Riddle, although other arrangers are represented. Almost all of the songs are taken from his famous concept albums; Sinatra was one of the first singers to package songs into the new album format and was certainly the most important and influential. He single-handedly brought the singer and the song in to the foreground where previously bandleaders had always been in the spotlight. As Benny Goodman had made the general public orchestra-conscious, so Sinatra made them singer-conscious. By the time he was on contract at Capitol Records he was rigorous with his selection of material and choice of orchestras and arrangers. Several of his records from this period represent the high-watermark of popular music in the 20th century. Seth MacFarlane will be making his return to the orchestra and we welcome leading British jazz star Claire Martin and making his debut with the John Wilson Orchestra is actor and singer Jamie Parker. We’re delighted that this very special event will be available on DVD for everyone to enjoy.”

Award-winning recording artist and BBC Radio 3 presenter Claire Martin will join the John Wilson Orchestra and Seth MacFarlane on stage “What a huge honour for me to be part of such a unique and wonderful night of music! It’s every singer’s dream to perform with a full orchestra and the John Wilson Orchestra is one of THE best in the world. Add to this the BBC Proms, the majestic setting of London’s Royal Albert Hall and the fantastic repertoire made famous by Frank Sinatra and we have all the ingredients for a sensational concert. Seth Macfarlane is a force of nature and, like Sinatra, a natural musician. My duet with him on Rogers and Hart’s ‘This Can’t Be Love’ will most definitely be a career highlight and my solo song - the classic Kern/Hammerstein ballad ‘The Folks who Live on the Hill’ - which was originally conducted by Sinatra is a song I’ve loved for many years and I can’t wait to sing it at this very special BBC Prom.”