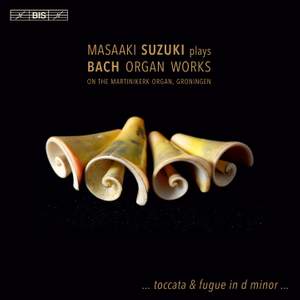 One of the most versatile of all Bachians, Masaaki Suzuki still manages to spring a surprise with this outstanding recital...From its woody chuff to bright rasp, the instrument is superbly captured... — BBC Music Magazine, January 2016, 5 out of 5 stars More…

Variation 4: Canon all' Ottava per augmentationem

The recipient of the 2012 City of Leipzig Bach Medal, Masaaki Suzuki has earned an enviable reputation as an interpreter of the music of Johann Sebastian Bach – as a reviewer in International Record Guide has put it: 'With Suzuki you can hear Bach's heart beat'. To a wide audience he is known as the director of Bach Collegium Japan, and the moving force behind the ensemble's acclaimed recordings of Bach's complete sacred cantatas. Perhaps less well known is that he began his career – at the age of 12! – playing the organ at church services in Kobe, where he was born. Suzuki has remained true to the organ throughout his life, and for BIS he has previously recorded Bach's German Organ Mass, as well as programmes of Buxtehude and Sweelinck. He here appears on a disc which combines some of Bach's best-loved works for the instrument, including the D minor Toccata and Fugue, the Partitas on ‘O Gott, du frommer Gott’, BWV 767, the Canonic Variations, BWV 769, and the celebrated Prelude and Fugue in E minor, BWV 548. The recording was made in Groningen's Martinikerk, with Suzuki performing on the renowned organ, one of the most important and impressive in the Netherlands.

One of the most versatile of all Bachians, Masaaki Suzuki still manages to spring a surprise with this outstanding recital...From its woody chuff to bright rasp, the instrument is superbly captured here and Suzuki uses it with flair and imagination...both this performance [of Von Himmel Hoch] and that of the pungent Pastorale breathe wioth the best seasonal spirit.