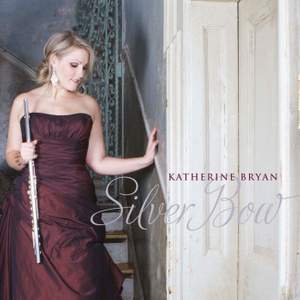 Vaughan Williams: The Lark Ascending (Arr. for Flute and Orchestra)

Shostakovich: The Gadfly Suite, Op. 97a: Romance (Arr. for Flute and Orchestra)

Frantisek Drdla: Serenade No. 1 (Arr. for Flute and Orchestra)

All tracks adapted for flute by Katherine Bryan.

Silver Bow sees flautist Katherine Bryan present a fresh view on some much-loved works, together with the Royal Scottish National Orchestra conducted by Jac van Steen. All the works, originally written for violin, feature captivating melodies that Katherine believes were crying out to be explored from the perspective of a different instrument.

The recording opens with Vaughan Williams The Lark Ascending; this favourite from the classical repertoire is a perfect fit for flute, an instrument often used to depict birdsong. There are dazzling showpieces from Saint-Saëns and Sarasate plus Paganini's 24th Caprice which features flutter tongueing (Variation 5), and pop tongueing (Variation 7).

Katherine's beautiful tone is showcased on works such as Kreisler's Liebesleid and Massenet's Meditation from Thaïs. All the solo violin parts have been transcribed and adapted for flute by Katherine herself. Katherine will launch Silver Bow with a concert in London at the Royal Overseas League on 28th September.

Katherine is a rising star having appearing as a concerto soloist with leading orchestras worldwide. Katherine balances her solo career with her role as Principal Flautist with the RSNO, a position she has held since the age of 21. She has given live broadcasts on Classic FM, BBC Radio 3 and BBC television.

Katherine was a prize-winner at the Royal Overseas League Music Competition in London, the Young Concert Artists Competition in New York and was a finalist in the BBC Young Musician of the Year for three consecutive competitions. Katherine s debut was nominated for an International Classical Music Award and her latest recording was named a Gramophone Choice.