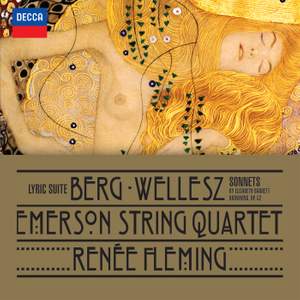 Wellesz: Sonnets From The Portuguese, Op.52

This release unites on record for the first time America’s reigning star soprano Renée Fleming and its premier string quartet, The Emersons, to take us on a journey into the twilight world of Vienna in the 1920s and 30s in music imbued with late romanticism and burgeoning modernism.

Berg’s Lyric Suite is a work of intricate, complexity believed to have a secret dedication and to outline a secret programme relating to Berg’s affair with Franz Werfel’s sister (Werfel was married to Mahler’s widow, Alma). Theodor Adorno called the work a “latent opera” and in its sixth and final movement, the Largo desolato, Berg introduces the soprano voice and quotes Wagner’s Tristan motif to evoke his doomed, impossible love.

This was still secessionist Vienna: a world of paintings by Klimt, psychoanalysis by Freud and a musical life where you could hear Bruno Walter conduct Mahler and Clemens Krauss lead the operas of Richard Strauss.

Egon Wellesz’s highly expressive setting of Sonnets by Elizabeth Barrett-Browning was one of the last works he completed before leaving Austria ahead of the Anschluss in 1938. It is heard here in its original version for soprano and string quartet. Barrett-Browning was one of the most popular English poets of the Victoria era, although Wellesz turned to German translations by Rainer Maria Rilke for his setting.

Renée Fleming is famed for her “intense and luxurious” (Evening Standard) performances of Richard Strauss and Korngold, Berg and Mahler. Her sumptuous sound is uniquely suited to this repertoire.

As Edward Seckerson wrote of her fin de siècle recital at the Barbican in 2012: “We were back in Vienna’s golden age and it seemed like that was where she had always belonged”.

This is an outstanding performance of Berg's Lyric Suite.

Astonishingly accurate and coordinated accounts ...[In the Lyric Suite's Finale] the Emersons leave you longing for what might have been...Wellesz suits Renée Fleming down to her fingertips. She is woven between the lines of the original quartet version.

Fleming sings with velvety evenness, threading her vocal line through the swirling strings, but in a rather impersonal, neutral way. But it’s the performance of the whole work by the Emersons that it is so remarkable; there is much more emotional directness, less of the usual armour-plated efficiency about their playing, and that, combined with the total technical assurance, suits the world of late Berg perfectly.