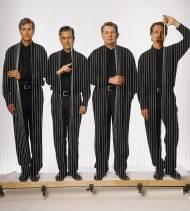 Acclaimed for its insightful performances, dynamic artistry and technical mastery, the Emerson String Quartet has amassed an impressive list of achievements: a brilliant series of recordings exclusively documented by Deutsche Grammophon since 1987; eight Grammy Awards including two for "Best Classical Album;" an unprecedented honor for a chamber music group; three Gramophone Magazine Awards and performances of the complete cycles of Beethoven, Bartók and Shostakovich quartets in major concert halls throughout the world. The ensemble is lauded globally as a string quartet that approaches both classical and contemporary repertoire with equal mastery and enthusiasm. For three decades, the group has collaborated with such artists as Emanuel Ax, Misha Dichter, Leon Fleisher, the Guarneri String Quartet, Thomas Hampson, Lynn Harrell, Barbara Bonney, Barbara Hendricks, the Kalichstein-Laredo-Robinson Trio, Paul McCartney, Menahem Pressler, Mstislav Rostropovich, David Shifrin, Richard Stoltzman and the late Isaac Stern and Oscar Shumsky.

Recording of the Week,  Bach Fugues from Onyx and the Emersons

A British brass quintet and American string quartet (who recently recorded an impressive account of The Art of Fugue) tackle fugues from The Well-Tempered Clavier.