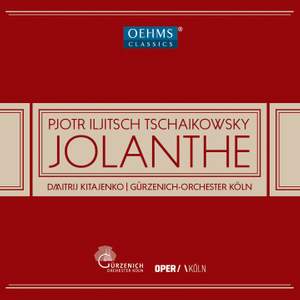 as a young innocent, Golovneva's Iolanta is preferable to the fuller, darker soprano of Netrebko…Vinogradov's soft-grained bass is rock-solid and on magnificent form…Popov is in mellifluous,... — Gramophone Magazine, October 2015 More…

The world premieres of Iolanta and The Nutcracker took place on 18 December 1892 at St. Petersburg’s Mariinsky Theatre. “The execution of both,” wrote the composer to his brother Anatoly the next day, “was magnificent, and that of the ballet perhaps too magnificent – its brilliance made one’s eyes tired.” Gustav Mahler conducted the first performance of the one-act opera outside Russia on 3 January 1893 in Hamburg and also directed the Viennese premiere of Iolanta on 22 March 1900.

as a young innocent, Golovneva's Iolanta is preferable to the fuller, darker soprano of Netrebko…Vinogradov's soft-grained bass is rock-solid and on magnificent form…Popov is in mellifluous, heady voice as Vaudémont…a top-drawer recording of an increasingly significant opera.

Andrei Bondarenko’s Robert hits the right note of cheerful, lightweight optimism, and Alexander Vinogradov is a near-ideal René, reining in his imposing basso cantante to suggest fatherly sensibility as well as regal poise. More impressive still is Vladislav Sulimsky’s Moorish doctor, half shaman, half psychologist, rock-solid yet elusive as the wind. His aria, an extraordinary essay in minimalist crescendo quite unlike anything else in Tchaikovsky, is done with thrilling power. I’m almost equally enthusiastic about Olesya Golovneva, whose unusual, ethereal Iolanta eschews the human warmth with which other sopranos have invested the blind Princess cured by love.

Seldom is one able to hear such superb casting and exceptionally good singers, everyone being a top choice for their role. But the real hero is Dmitrij Kitajenko whose direction of this beautiful yet often neglected opera is magnificent. The Cologne forces respond wholeheartedly to his conducting and the recorded sound is great. Undoubtedly, this Iolanta is the ultimate reference recording of Tchaikovsky’s work.