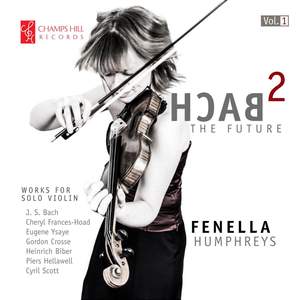 A tricksy title, but this is an interesting, diverse programme…[Humphreys] shapes the music with skill, and sometimes with humour: I especially enjoyed the almost throaway ending to the Gavotte... — BBC Music Magazine, October 2015 More…

Frances-Hoad: Suite No. 1 for Solo Violin

Take one motivated and talented young British violinist, inspired by the solo violin music of JS Bach, and mix with some of the best British composing talent of today and the result is: Fenella Humpreys’ “Bach 2 the Future”.

Fenella Humphreys came to performing Bach’s masterpieces in their complete form relatively recently, but was frustrated by a lack of solo works to perform alongside them.

A Kickstarter and remarkable fundraising drive ensued, and Fenella has been able to commission works from Cheryl Frances-Hoad, Gordon Crosse and Piers Hellawell which appear on this new disc. It also includes ‘Bumblebees’ by Cyril Scott (d 1970)

Gordon Crosse’s ‘Orkney Dreaming’ has a particular resonance for Fenella as it’s where she conceived the project.

Fenella has commissioned another three works, to be premiered live in Summer 2015, from Sir Maxwell Davies, Sally Beamish and Adrian Sutton to be released on the next disc.

Her busy schedule sees her performing premieres this year at Aldeburgh, Presteigne and St Magnus Festivals, and across the UK.

A tricksy title, but this is an interesting, diverse programme…[Humphreys] shapes the music with skill, and sometimes with humour: I especially enjoyed the almost throaway ending to the Gavotte en Rondeau, and there is always space for the music in the rhythmic timing and lift to the phrasing.

Look past the cheesy title and you find an intriguing project by violinist Fenella Humphreys, who is commissioning new British companion pieces to Bach’s six iconic sonatas and partitas. Here she performs the first three commissions, alongside a spirited yet unhurried account of Bach’s E major Partita. Cheryl Frances-Hoad’s Suite No 1 is a vibrant response to that work.