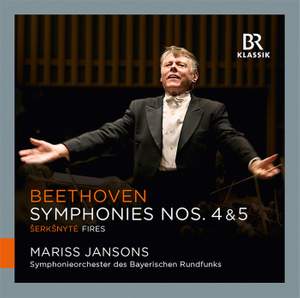 The Symphonieorchester des Bayerischen Rundfunks has already performed Beethoven symphony cycles on several occasions. Its chief conductor Mariss Jansons has now extended the cycle concept in many respects, with concerts from the Tokyo Suntory Hall with its excellent acoustics, specially assigned commissions from contemporary composers providing their own musical reflections on Beethoven symphonies, and also presentation of the outstanding concert events in live recordings for the music market. The live recordings of Symphonies Nos. 4 and 5 by Ludwig van Beethoven were made in 2012 in the Suntory Hall in Tokyo. The orchestral work Fires by the Lithuanian composer Raminta Šerkšnytės (born 1975) refers to the "con brio" tempo marking of the first movement of Beethoven's Fifth, which can also mean "with fire." It was also recorded in 2012, but in Munich's Herkulessaal.