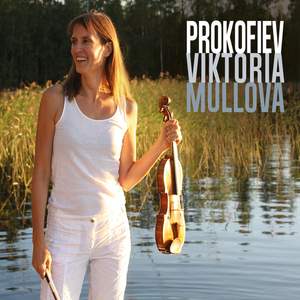 Viktoria Mullova's admirers will welcome this chance to hear her latest thoughts on a favourite concerto…don't expect the sweet unflappability of Guro Kleven Hagen in the main work; Mullova's... — Gramophone Magazine, October 2015 More…

Viktoria Mullova’s new ONYX album is an all Prokofiev affair recorded live, with the lyrical 2nd violin concerto joined with the solo violin sonata and the sonata for two violins. Robert Soetens premiered the Duo Sonata in Paris in December 1932, partnered by Samuel Dushkin, for whom Stravinsky had recently composed a Violin Concerto. Knowing of Prokofiev’s rivalry with Stravinsky, Soetens persuaded Prokofiev to write him a concerto. Composed in 1935 just before Prokofiev resettled in Soviet Russia, the Second Violin Concerto includes in its central movement one of his most celebrated long-arching melodies. The Solo Sonata was an official commission towards the end of Prokofiev’s life.

Originally intended for an ensemble of talented child violinists, Prokofiev so wrote the work that it could equally be played by a soloist. Paavo Jarvi and Viktoria Mullova have been close musical collaborators for many years.

Viktoria Mullova's admirers will welcome this chance to hear her latest thoughts on a favourite concerto…don't expect the sweet unflappability of Guro Kleven Hagen in the main work; Mullova's interpretation is made of sterner stuff…[her] sound is as big and well-rounded as ever, not without that familiar touch of steel…competition is fierce, but then Mullova is in a league of her own.

Mullova’s playing…is, at all times, utterly faithful to the score and is totally committed to the great Russian composer … the performances of both Sonatas could surely not be improved upon by any artist, and Mullova’s commitment here raises the stature of these works considerable.