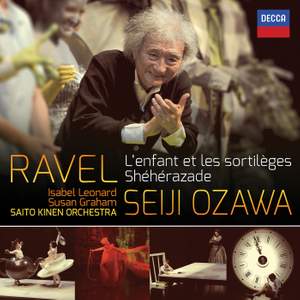 Susan Graham has absolutely the right voice for this music and knows it well. Her French is fine and I'm delighted she respects Ravel's carefully notated vocal slides. — BBC Music Magazine, December 2015 More…

One of the world’s legendary conductors, Seiji Ozawa celebrates his 80th birthday in September 2015. To celebrate, this disc of all-new Ravel recordings features one of the composers he has been most closely associated with over his long career.

As a student of Charles Munch and Pierre Monteux, Seiji Ozawa studied with two of the 20th century’s greatest exponents of Ravel. In the 1970s he recorded a benchmark set of the complete orchestral works for DG with the Boston Symphony during his record-breaking 29 year tenure with the orchestra.

The recording of L’enfant et les sortilèges marked Seiji Ozawa’s first full return to conducting after recovering from surgery for life-threatening cancer in 2013. One of the performances was given in the presence of the Emperor and Empress of Japan who had journeyed to the city of Matsumoto especially for the occasion.

Susan Graham has absolutely the right voice for this music and knows it well. Her French is fine and I'm delighted she respects Ravel's carefully notated vocal slides.

Ozawa conducts a fine cast that puts the text over clearly.

Isabel Leonard makes a believable Child, from the tantrums at the start to the pity, sympathy and loneliness of the ending...A special bouquet to Marie Lenormand and Elliot Madore as the cats, whose mewing is particularly accurate...Susan Graham, like Ozawa, is at home in the French repertoire...and she is magically sensuous in Shéhérazade.

The song cycle receives a purposeful reading, Graham capturing the sultry sensuousness of both text and music and bringing to the unfolding of its three small narratives a rich diversity of expression. Alborada, meanwhile, shimmers in a bright and shiny account from the virtuoso orchestra which Seiji Ozawa co-founded back in 1992. [L'Enfant] It represents exactly the kind of repertoire in which Ozawa has excelled over the decades, his much admired ability to separate out its rich, subtle and multicoloured textures memorably displayed and finely captured in the full-range recording.

Yvonne Naef’s Maman and Leonard’s petulant Child are among the successes here, but Ozawa’s conducting is heavy-handed and brash. He calms down for Graham’s Shéhérazade, even more ravishing than her 2005 BBCSO version.

it’s a performance of remarkable assurance, beautifully recorded with scarcely any extraneous stage noise, and every texture and instrumental detail perfectly placed and meticulously realised by the fabulous hand-picked Saito Kinen Orchestra...Isabel Leonard is the Child, never coyly childish, and the multifarious doublings among the rest of the cast...are all kept just the right side of exaggerated caricature.