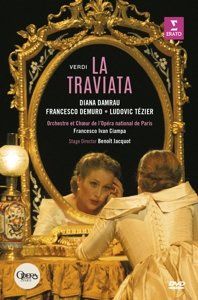 Vocally, Damrau can run rings around the notes, but in this role that's not enough. Francesco Demuro makes a likeable if uninteresting Alfredo…best of the principals is Ludovic Tézier's Giorgio... — BBC Music Magazine, November 2015 More… 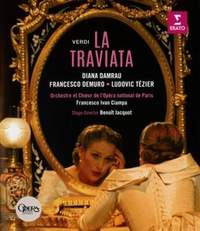 Diana Damrau’s primacy as an interpreter of Violetta Valéry in La traviata can be inferred from the names of theatres where she has performed Verdi’s most popular opera: the Metropolitan, New York; La Scala, Milan; London’s Royal Opera House; the Bavarian State Opera in Munich and the Zurich Opera. Paris’s Opéra Bastille joined that list of leading houses in June 2014, when the German soprano appeared in a new production by the film director Benoît Jacquot. Conducted by Francesco Ivan Ciampa, it is presented on this DVD release from Warner Classics, which joins a DVD of Verdi’s Rigoletto, with Damrau as Gilda, recorded in Dresden and released in 2010, and the recent CD release of the soprano’s spine-tingling interpretation of Donizetti’s Lucia di Lammermoor, recorded live in Munich.

When she first sang Violetta – in New York in 2013 – Damrau told the Metropolitan Opera’s Playbill that: “I waited a long time to tackle this role because it’s very special for me. I fell in love with opera watching the Franco Zeffirelli movie of La traviata with Teresa Stratas and Domingo as Alfredo. I was 12 and I sat glued to the TV screen and I cried, and afterwards I thought, ‘This is the most beautiful thing humankind can create.’ But I wanted to wait, because to sing Violetta and express her feelings you really have to understand life.

... Violetta’s done it all, and she knows she’s going to die and that when she’s gone people won’t care. But she has a very honest heart. She’s the only person in the opera who loves without limits. And to give up Alfredo for the sake of his family – greater love is not possible. She’s selfless.”

Jacquot’s production, praised for its beauty, elegance and intelligence by the French newspaper Les Echos, is set firmly in the 19th century. It takes inspiration from the paintings of Manet and features sumptuous 19th century costumes and striking decor, such as monumental canopy bed in Act I and a huge tree and a giant staircase for Act II.

When it came to the performances, Les Echos said that Diana Damrau “lived up to expectations” with “such expressive truth and such a palette of nuances in every phrase” and with her understanding of Violetta’s physical and psychological fragility. The Financial Times stated that “ ... [Damrau’s] voice is simply glorious, whether in cradled pianissimi or heroic outbursts,” and went on to praise her male partners: “Her good-looking Alfredo, Francesco Demuro, has youthful passion and ringing tenor tone ... As Germont père, Ludovic Tézier shows off his superb baritone.” The British magazine Opera, meanwhile, felt that: “Ludovic Tézier ... could hardly be bettered, blending velvet and steel and assuring a superb legato.”

Vocally, Damrau can run rings around the notes, but in this role that's not enough. Francesco Demuro makes a likeable if uninteresting Alfredo…best of the principals is Ludovic Tézier's Giorgio Germont, a distinguished piece of singing and thoughtfully acted.

Damrau acts out her impression of a stage Violetta rather than ever becoming Violetta…the music-making around her has class. Francesco Demuro's Alfredo shows attractive colours and a fluent and well-used top, and he can rage (Act 2) and suffer without affectation. Ludovic Tézier has class, plays a good age and captures the contrasting emotions of his three scenes most clearly.