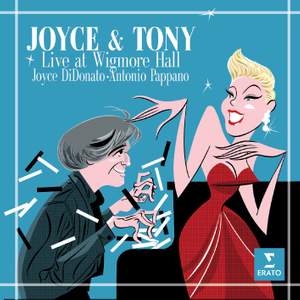 Live at the Wigmore Hall

both of these artists know how to deliver popular material with skill and grace...[in the Haydn] DiDonato's interpretative imagination matches Tony Pappano's thoughtful and pianistic approach...[Pappano]... — BBC Music Magazine, October 2015, 4 out of 5 stars More…

Kern: Leave it to Jane, Act 2: The Siren's Song

Dougherty, C: Love in the Dictionary

Berlin, I: I love a piano

Lowry, R: Lowry / Arr. Krane: Bright Jewels for the Sunday School: "How Can I Keep From Singing?"

The great American mezzo talks to Katherine about her new recital-disc with Tony Pappano from the Wigmore Hall.

London’s Wigmore Hall is an intimate venue – its auditorium holds 550 people – but it is one of the world’s great concert halls. Its acoustic is legendary, and great singers of the past who have appeared there include Enrico Caruso, Nellie Melba, Elisabeth Schwarzkopf and Victoria de los Ángeles. To open its season is a special honour for a musician, and in September 2014 that honour went for the second time to American mezzo-soprano Joyce DiDonato. Her pianist for the occasion was none other than Sir Antonio Pappano, who generally devotes his time in London to his duties as Music Director of the Royal Opera House, Covent Garden. The Times described the pair as “mezzo diva supreme” and “golden maestro and piano accompanist to the stars”.

These two CDs were recorded live at the Wigmore Hall season-opener and at the repeat concert two days later.

The first item on the programme was Haydn’s dramatic cantata Arianna a Naxos (which, back in 2003, also launched DiDonato’s debut recital at Wigmore Hall). As the Guardian wrote, DiDonato excelled in presenting “the abandoned heroine's progression from grief to fury with all her vocal skills to the fore and Antonio Pappano – rarely heard these days as an accompanist, but an absolute master of the art – seconding her every gesture.” The Times described the interpretation as “incandescent ... Daring vocal pirouettes, vivid acting, wide dynamic swings, amazing breath control.” Then came two songs by a composer who has played a defining role in Joyce DiDonato’s operatic career – Rossini (her unforgettable collaboration with Pappano on Il barbiere di Siviglia at Covent Garden is captured on a Warner Classics DVD 5099969458194) – and four luscious late-Romantic numbers written in 1908 by the little-known Neapolitan composer Francesco Santoliquido.

DiDonato, who nicknames herself ‘Yankee Diva’, is from Kansas, and the London-born Pappano moved to Connecticut as a teenager, so it was fitting that the rest of the programme was dominated by American composers. Notable among them were: Stephen Foster, known as “the Father of American Music”; Jerome Kern, whose ambitious Show Boat ushered in a new epoch in American musical theatre; Richard Rodgers, whose work with lyricist Lorenz Hart exemplifies the sophisticated side of Broadway, and William Bolcom (b.1938), whose eloquent and often witty songs draw on both classical and popular idioms. The transatlantic theme extended into the encores – all three of them: Kern’s ‘All The Things You Are’, a glory of the American Songbook; Irving Berlin’s subtly raunchy ‘I Love A Piano’, and finally DiDonato’s signature number ‘Somewhere Over The Rainbow’ by Harold Arlen. It features, of course, in the 1939 film classic The Wizard of Oz, which opens (in black-and-white) on a farm in the mezzo-soprano’s home state. Famously, when the heroine, Dorothy, steps out into the brilliant Technicolor of the Land of Oz, she says: “I've a feeling we're not in Kansas anymore.” In September 2014, Joyce DiDonato was most emphatically at Wigmore Hall in London, creating magic with Antonio Pappano.

both of these artists know how to deliver popular material with skill and grace...[in the Haydn] DiDonato's interpretative imagination matches Tony Pappano's thoughtful and pianistic approach...[Pappano] takes everything in his stride, throwing a few witty pianistic interjections into Irving Berlin's 'I Love a Piano' and generally enjoying himself to entertaining effect.

DiDonato's remarkable evolution as an actress now allows her to convey dramatic precision while respecting [the Haydn's] classical outlines...the specificity of DiDonato's conviction breaks through one's preconceived notions about the respective genres.

Last year’s recital by the dream duo of Joyce DiDonato and Antonio Pappano works wonderfully as a double CD - arguably more effective than the concert itself...DiDonato’s immaculate voice relishes every vowel sound, Pappano responds with pianistic wit and idiomatic invention. Ad libs and applause are judiciously included. All a delight.

This potent combination of kindred spirits was irresistible in live performance, and sounds just as good on this recording...Both DiDonato and Pappano are spellbinding in Haydn’s scena, Arianna a Naxos. She gives full tragic weight to the heroine’s plight yet never allows the voice to spill into 19th-century histrionics; he finds wonderful pathos in Haydn’s delicate passagework.

DiDonato demonstrates the full range of her expressive and technical gifts in a wide-ranging program...Pappano, better known for his work on the podium, is an exemplary collaborative pianist here, supporting Ms. DiDonato’s voluptuous singing with characterful, virtuosic playing.

This album’s title might sound informal for a souvenir of the Wigmore Hall’s season-opening night, but it captures the atmosphere of the performances – at once informal and highly professional – of the dream-team of Joyce DiDonato and Antonio Pappano. Ranging from Haydn’s Arianna to The Wizard of Oz’s Dorothy, with rarities in between, the recording finds mezzo and pianist both very much artistically at home.