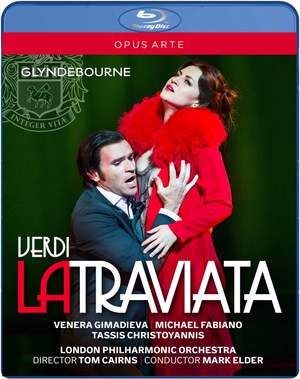 [Elder's] handling of the score is a revelation; nothing here is routine...one is overwhelmed by the beauty of the playing and of the work. Cairns's production is quite excellent, with strong,... — BBC Music Magazine, October 2015, 4 out of 5 stars More…

Verdi’s tragic masterpiece is elegantly updated by director Tom Cairns in this ‘fresh and thrillingly unfamiliar' (Independent) Glyndebourne production, in which Violetta’s death is cast as an idée fixe, creating a liberating framework that is well supported by Hildegard Bechtler’s semi-abstract designs. Described as a soprano of ‘huge presence, compelling to watch’, Venera Gimadieva is ‘thrilling’ (Guardian) in her company debut as the doomed courtesan, well matched by Michael Fabiano’s sharply suited and ‘robustly-sung’ Alfredo (Financial Times), with Tassis Christoyannis delivering an imposing performance as the formidable Germont Père. Conductor Mark Elder reveals his mastery of the opera’s dramatic shape, coaxing each and every nuance out of the London Philharmonic Orchestra to create beautifully stylish music-making.

- Extra Features: Verdi’s La traviata - ‘Once heard, never forgotten’, ‘An opera for all times’, and a Cast Gallery.

"there can be no doubt of his [Mark Elder's] mastery of the opera’s dramatic shape and instrumental palette, flawlessly rendered by the London Philharmonic.’’ The Daily Telegraph

[Elder's] handling of the score is a revelation; nothing here is routine...one is overwhelmed by the beauty of the playing and of the work. Cairns's production is quite excellent, with strong, vivid characterisation of even the minor figures...Gimadieva sings what is famously a difficult role...most impressively. Her acting is vivid too...Alfredo is ideally sung and acted by Michael Fabiano, youthful, impetuous and intense, with a ringing voice.

the transfer to the small screen enhances some subtleties (especially of the stronger first half) and lets Venera Gimadieva's Violetta feel like a Gheorgiu-like success of a star on the cusp. The Russian soprano has, and shows skilfully, a grasp of the situations in which the character finds herself that is not only telegraphically clear but most un-prima-donna-ish…Gimadeva (whose coloratura is as consistently immaculate as the rest of her performance) is well supported by her fluently voiced if slightly stiff American Alfredo and the smaller roles.

As Violetta, the Russian soprano Venera Gimadieva wins an extraordinary reception at the curtain...she clearly has a lot going for her, not least in terms of her stage personality and looks. Dramatically, her Violetta registers as determined and selfpossessed; vocally, hers is a relatively small-scale account, and there are sections where more sheer strength is needed; still, her vocalism is broadly fluent, if a long way from ideally accurate. Michael Fabiano’s Alfredo is likeable and vocally graceful.

An insight into La traviata at Glyndebourne 2014