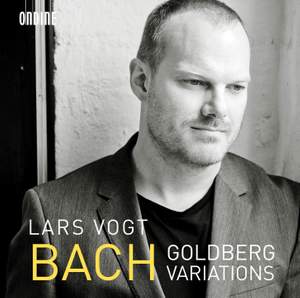 Vogt's feeling for the over-arching whole is impressive. He's not above a little 'guiding' either - pianist that he is, sometimes drawing attention to detail in a way denied to Bach's harpsichord.... — BBC Music Magazine, November 2015 More…

Originally written for the harpsichord the Goldberg Variations, published in 1741, embody an Aria with 30 variations and a coda. Bach wrote the work for Johann Gottlieb Goldberg, who, as the narrative says, often played music as a cure for Count Kaiserling’s insomnia. Apparently the work was one of the successes that Bach had during his lifetime and it was also published during his lifetime.

Lars Vogt was appointed the first ever “Pianist in Residence” by the Berlin Philharmonic in 2003/04 and enjoys a high profile as a soloist and chamber musician.

Vogt's feeling for the over-arching whole is impressive. He's not above a little 'guiding' either - pianist that he is, sometimes drawing attention to detail in a way denied to Bach's harpsichord. But he's sparing in the use of the pedal and, like András Schiff and Murray Perahia, inclined to let his fingers sing wherever possible - to laugh, too.

he seems to me to bring qualities of freshness and joie de vivre to the Goldbergs that have often been much less marked. He is not reverential and he has noted – correctly, surely – how entertaining the Variations are...Vogt is an artist with much to communicate, and this is a distinguished addition to the discography of the Goldberg Variations in all their glorious elegance.

Informed by period performance practice but playing on a modern grand, Vogt uses very little pedal and keeps ornaments clean and graceful. Textures are transparent. The simplicity, wit and honesty of his approach makes this a wonderful addition to the catalogue by a versatile musician.