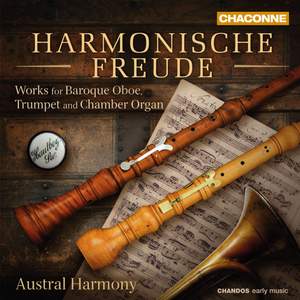 Some instruments work better together than others and the oboe occasionally overpowers the organ. Nevertheless, beautifully, joyously performed, this is a thought-provoking disc I look forward... — Gramophone Magazine, September 2015 More…

I. Preambulum in D Minor

Harmonische Freude features chamber music by Johann Sebastian Bach and his extended circle, played on historical instruments by Austral Harmony, an ensemble of Australian musicians who specialise in music of the 18th century. The group fosters a particular interest in the works of Johann Sebastian Bach, and presents innovatively designed programmes promoting less familiar repertoire. This is its first recording on Chandos.

Using the sustained tone of a small pipe organ alongside baroque oboe and trumpet, the musicians create an impression of intimacy and a pleasing variety of sonority. Inspiration comes from Georg Friedrich Kauffmann’s concept of having an oboist imitate an organ stop by playing from the organ loft. Bach employed Lutheran chorales exhaustively throughout his choral and organ works; his pupils Krebs and Homilius composed chorale adaptations which included oboe and trumpet in a solo role. Four different trumpets and an oboe d’amore lend expressivity to the various hymn tunes which are a focal point of the disc. The musical idiom of other associates and pupils of Bach reflects the progressive and predominantly melodic galant style which ushered in the musical ideals of the Classical era.

Some instruments work better together than others and the oboe occasionally overpowers the organ. Nevertheless, beautifully, joyously performed, this is a thought-provoking disc I look forward to revisiting and sharing with friends.