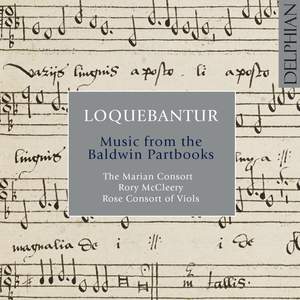 The most striking feature of this entertainingly varied collection is the consistently fresh, fruit-ripe tonal quality of the Marian Consort's singing…sensitive unison singing, and a firm bass... — BBC Music Magazine, November 2015 More…

Ferrabosco, A I: Da pacem Domine

Baldwine: Coockow As I Me Walked

John Baldwin was a lay clerk at St George’s Chapel, Windsor in 1575 and became a Gentleman of the Chapel Royal in 1598. The so-called ‘Baldwin Partbooks’, held at Christ Church, Oxford, were his creation – a very personal collection, representing his individual tastes and interests from a wealth of English and Continental polyphony and consort music.

As in their previous collaboration, an exploration of the similarly conceived partbooks of Robert Dow, the Marian Consort and Rose Consort of Viols have kept faith with Baldwin’s own intentions, bringing to light some of the rarer gems preserved by this great advocate and music-lover and providing the listener with ‘such sweete musicke: as dothe much delite yeelde’. The Marian Consort has to date released four CDs with Delphian Records which have met with considerable critical acclaim. The ensemble’s most recent release, of a Christmas mass and motets by Jean Mouton, Cristóbal de Morales and Annibale Stabile (DCD34145), was ‘Christmas Choice’ in BBC Music magazine.

The most striking feature of this entertainingly varied collection is the consistently fresh, fruit-ripe tonal quality of the Marian Consort's singing…sensitive unison singing, and a firm bass lead from Christopher Borrett set Sheppard's Ave maris stella purposefully in motion. Interpretively it's the programme's finest performance, the pacing more poised and flexible, the text responded to with notable insight and maturity.

there is…programmatic integrity and a convincing ebb and flow between them.

The Marian Consort has built an enviable reputation for coolly poised and precisely balanced performances and indeed there are times here when the listener can only sit back and admire, seduced by the sheer beauty of sound.

[an] engaging and thoughtfully planned programme … it is a measure of his [John Baldwin] discriminating, adventurous taste as well as the commitment and talent of the performers here recorded so well, that there is not a single unappealing moment. Be equally adventurous and investigate!

The splendid Marian Consort sings the music beautifully... to quote Baldwin himself, this thoroughly recommended disc provides "such sweete musicke: as dothe much delite yeelde".