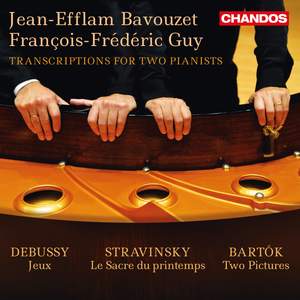 I. Viragzas (In Full Flower)

The Augurs of Spring - Dances of the Young Girls

Ritual of the River Tribes

Procession of the Sage

Circles of the Young Girls

Evocation of the Ancestors

Ritual Action of the Ancestors

These two-piano transcriptions played by Jean-Efflam Bavouzet and François-Frédéric Guy renew our experience of three great orchestral works, each of which was premiered in 1913.

Bavouzet’s version of Jeux is, like any fine transcription, far more than a memento of the original. Not only the trills and tremolandos needed on the piano to maintain sustained notes and chords, but also the interplay between the pianists, lines and motifs bouncing between them, become active participants in an intimate music of undulant ambiguity, dream, and darkness.

‘In Full Flower’, the first of the Two Pictures by Bartók, is often taken as his most Debussian composition thanks to his exploration of new scales and harmonic worlds. However, in bringing out its luxuriant and blossoming Hungarian aspects, Zoltán Kocsis emphasises rather its fully Bartókian character, which Bavouzet has conveyed to wide critical praise. The two ‘pictures’ here provide a route from Debussy’s world of erotic reverie to Stravinsky’s of ancient ritual. The thundering and the bells of the two pianos in full and accurate fury make this version of Stravinsky’s Le Sacre du printemps hardly less forceful in the hands of these two dazzling and virtuosic pianists.

Fabulous playing from a pair of completely on-form pianists, which lends The Rite of Spring’s rhythmic themes a quite thrilling intensity.

The programme works brilliantly, allowing us to hear the music as the composers did when they worked on these masterpieces and, in the case of the Rite, in the form in which it was most often played in the years after the premiere. Any losses in orchestral palette are compensated for by the clarity and wide range of colours at the pianists’ disposal.

Bavouzet and his well-matched partner, François-Fréderic Guy, play with nimble grace, capturing the works wit and mystery. This gripping album is dedicated to Pierre Boulez, guru and enabler, for his 90th birthday.